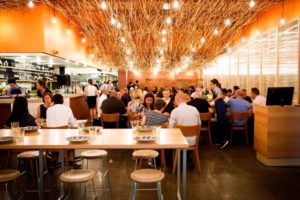 It is a team challenge tonight on Masterchef Australia. It is at George Columbaris’ own restaurant, Helenic Republic in Kew. The teams have to cook a Greek feast and the teams are chosen randomly by George.

George brings out the dishes that will be cooked today. One is a lamb on a spit, each team will have to cook this, as well as other dishes in the three course dish. The restaurant will be filled with George’s Greek family and friends and his mum will be the special guest judge of the evening.

Miles gets his blue team started on the lamb spit straight away and he allocated Brett to the task. They have to make a pie, a dip and a saganaki. They decide to make a spanakopita and a beetroot dip, the saganaki will be served with spiced apricots on top.

Zoe gets her red team started on their entrees. She decides on a roasted eggplant dip and a spiced mince pie.

The main dish that the blue team is cooking is a lamb moussaka along with the lamb on a spit. George questions if they should have two lamb dishes. Miles then decides to make it a vegetarian version.

The red team is also making a moussaka and Zoe has the idea to make it with beef brisket instead of lamb. Some of the other red team members are worried that the beef will not cook in time.

George comes past the red team and tastes their mince pie. He says it is too dry so they decide to add some caramelised onion to the pie. Zoe decides to bring Charlie in from outside so now she has no-one basting the lamb. George questions her decision but she sticks with it.

George’s mum pops into the kitchen to say hello. She wishes all of the teams luck.

The blue team decides to get started on their saganaki, they start cooking them in a frypan and they melt and collapse. It is not working out properly.

Service time has started. The entree orders are flying out quickly.

The blue teams menu goes out to the judges first. A spanakopita, saganaki with apricots and beetroot dip. George’s mum really liked the spanakopita and she loved the apricots on the saganki.

The red team’s entree goes out next. A spiced mince pie, a saganaki with currents and grapes, a roasted eggplant dip. George’s mum is impressed again, especially with the saganaki.

Brett has brought the lamb in and starts carving it up. George is very impressed with how well it is cooked.

The blue team has sent their main dishes out to George’s mum and the judges. A vegetarian moussaka and lamb and a salad. George’s mum loves the flavour on the lamb and the home cooked style of the moussaka.

The red team does not have their main courses ready. They finally get them ready and start sending them out.

The red team sends their main dishes out to George’s mum and the judges. A beef moussaka, lamb and salad. The judges love the beef moussaka and the salad. They like how some of the spit meat is still served on the bone.

Back in the red team’s kitchen, Celia is struggling making all of the three desserts by herself.

The blue team send their desserts out to the judges. Doughnuts with honey syrup, watermelon in ouzo and rice pudding with butterscotch brandy sauce. The judges enjoy all of their desserts.

The red team is behind again and all of the members are helping to assemble the desserts.

Both teams finish and can relax that service is done.

It’s time to find out which team has performed the best tonight. The blue team has won tonight and the red team will be going into an elimination tomorrow.