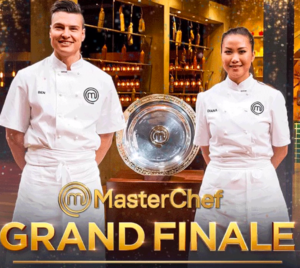 In the Masterchef Grand Final and there’s only one winner. Who won Masterchef 2017? Will it be Ben, Karlie or Diana, spoiler alert, find out the winner.

First, there is a cook off to decide who will partake in the final. It is a service challenge. The contestants enter the room, the contestants are on the balcony and the tables are set. Each contestant must make a main and a dessert for 25 guests, they have 4 hours. They will be judged on their consistency, service and dishes. Shannon will be running the restaurant.

Read how the Masterchef Semi Final went down here.

It is Ben vs Diana in the Masterchef Grand Final. There is only one winner, who will win Masterchef Australia tonight?

Whose arms are these?

It is time to start the cook off, Ben and Diana enter the room. There are three rounds, each round is worth 30 points.

The first round is a mystery box challenge. The two contestants have to choose any mystery box that they have had throughout the competition. Ben chooses Halina’s mystery box, it has blue swimmer crap, chocolate, cucumber, grapes. Diana chooses the Pete Gilmore box, it has artichoke, chicken and the garden. They both have 60 minutes to cook one plate of food, they have to use at least one ingredient from the mystery box and can’t use the pantry.

Who will be the Masterchef Winner?

Ben is making an ice cream recipe with cucumber and a goats cheese mousse. Diana is making abalone with crispy spatchcock and, brocolli and nasturtium leaves from the garden.

Both contestants are cooking very well, ben is making grapes two ways and going to add some smashed shortbread to his dish. Just then, Ben cuts himself, this will set him back a bit. The medic fixes him up but there is only 20 minutes left. He continues cooking but it starts bleeding through the dressing, he is losing even more time. 10 minutes to go.

It is down to the wire.

The scores for round one are in.

After round 1, could Diana be the Masterchef 2017 Winner?

In round 2, there are no rules, they can cook whatever they like from any ingredients. They have 75 minutes, however, they must make three plates that are identical in look and taste. Ben is making a butternut scotch with dutch spices and ice cream again. Diana is making a prawn dish with celery.

Diana tastes her prawns, they taste good, she has to cook them all exactly the same. She starts plating up, but isn’t sure how to present this dish. She is running out of time, there is one minute to go. Ben is almost done plating up.

The first dish to be judged is Diana’s “Malaysian Oatmeal Prawns”. She is worried her dish isn’t presented as well as Ben’s. Matt says so many chefs around the world have reinvented dishes, and this is one of those dishes. He loves the creamy sauce and the baby corns. Gary says the prawns were cooked perfectly and it is signature dish.

Next is Ben’s “Cardamon Coffee Ice Cream with Butternut Three Ways”. George says it looks really beautiful. Gary says he loves the depth of the spices and the flavours. George says he hopes he will open an ice cream shop. Matt says all the flavours combine is “wow”

Kirsten Tibballs walks into the Masterchef kitchen, she is setting the final challenge tonight. Gary and Matt reveal the challenge that Kirsten has designed. It is a still life display of fruit, a flower, a jug, a candle and more. George tells them they only need to focus on the three fruits on the plate. There’s a pear, mandarin and apple. Kirsten describes how she has made the fruits out of chocolate. George cuts open the mandarin, inside there is a hazelnut dacquiose base, mandarin jelly and creme, vanilla mousse and a glaze. George cuts open the pear, hazelnut dacquoise, vanilla mousse and pear. The final  fruit is a green apple, it has hazelnut dacquoise, salted caramel, a sugar crusted liquor and tempered coverture chocolate. The contestants have 6 hours to recreate the fruits, 40 points are up for grabs, 10 points from each judge including Kirsten. 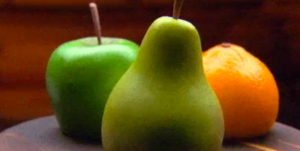 Diana decides to block out the noise from the gantry and gets started on her vanilla mousse. She also starts on making the sugar crust for the liquor for the inside of the apple. Ben is also up to the same stage. He is getting a little flustered and is having trouble following the recipe. Ben has burnt off the alcohol for his filling and Kirsten questions why he had done it, the recipe states that he needs to only gently warm the alcohol. Ben has to start that step again. Ben has trouble with his sugar syrup and needs to start that step again. He is buckling under  the pressure. George talks to him and he tries to pick himself up, his son cheers him on from the gantry. He tries to make his syrup for a third time.

Diana is up to her mandarin juice and decides to squish them with her hands as it will be faster than a juicer and Ben starts multitasking and uses the juicer for the mandarine.

Diana takes her sugar crusted liquor out once it has set, she cuts into it but it is not liquid in the centre it is like jelly. She has to decide whether to make it again, and she does. This will set her back. Ben takes his out and cuts through it, it is also crystalised. He has attempted this three times and has no more ingredients left to remake it. He has to move on.

Who will win Masterchef Australia 2017?

Ben is moving ahead quickly. Diana takes her second lot of sugar crusted liquor and cuts it open, it hasn’t worked again. Diane is upset, she doesn’t think she will have enough time to get the presentation perfect, she is cracking under the pressure. She pulls herself together and keeps going.

Ben coats his fruits in tempered chocolate, he accidentally drops his pair in twice, so it will be double-coated and potentially too thick.

There is 15 minutes to go, Diana is coating her fruits and ben is spraying his. It is getting close. With three minutes to go, Ben is almost done plating up, Diana is rushing to the end, she is just picked them up and putting on the plate, her pair falls and the stem breaks, she tries to make another one, with one second to go she gets it on the plate.

It is up to the judges now. Is Diana the Masterchef winner, or is Ben the winner tonight?

The first dish to be tasted is Diana’s. She says it is the hardest thing she has ever done. Kirsten says the dish is “pretty damn impressive”. George tries to cut the mandarine, but the chocolate is really thick and the apple doesn’t have the liquid centre. Kirsten says she has got the flavours perfect. Gary loves that everything is delicate, but he doesn’t get a lot of mandarine flavour from the mandarine.

Next is Ben’s dish. His dish is presented better. Could he be the Masterchef Winner?

His dish is also missing the liquid centre on the apple and the coating on the pear is thick. Matt says the mandarine is “outstanding” and the fruits have a better separation of flavours. George says the stems are incredible. Kirsten says the pear is too sweet because it was double-dipped, but that is her only criticism.

Diana is the winner of Masterchef Australia 2017