Tonight on Masterchef Australia is the Immunity Pin challenge. There are two pins up for grabs, Nicollete already has one, but there might be two more at the end of tonight. There are four contestants, Chloe, Mimi, Brett and Karmen. The first challenge will be to cook in pairs. Chloe won the previous challenge and has an advantage. She gets to choose her partner today and chooses Brett.

The first round is a jaffle challenge. The teams have to cook two jaffles to cook in 45 minutes, one sweet and one savoury.

Brett is making a middle eastern style jaffle with a curry aioli and fennel. The judges come over and question the flavours, this puts doubts in his head.

Karmen is making a sweet raspberry curd jaffle with chocolate. Mimi is making a roast beef jaffle with caramelised onion, she cooks the steaks but doesn’t think about them cooking when they are in the jaffle. The judges come over and they are over cooked.

First to be tasted is Karmen and Mimi. Mimi’s eye fillet jaffle is cut open. The steak isn’t over cooked, she is releaved. The bread is a grain bread and has lots of cheese in it. It is garnished with roasted cherry tomatoes. George likes the blue cheese mixed in. Shannon didn’t like the grain in the bread, but loved it with the tomato. Next is Karmen’s raspberry and dark chocolate ganache jaffle. It oozes when they cut it in half. The judges enjoy it. Gary says it’s great. Matt says its delicious, not too sweet, a restaurant quality dish.

Next is Chloe and Matt’s turn. First is Matt’s spiced mince with caramelised fennel and aoili jaffle. He didn’t put cheese in it, and is second guessing this choice. The judges say its a brave choice. George says the curry powder mayonnaise is wrong but in a right way. Shannon says the only thing that could improve the jaffle is eating it at midnight. Gary says its his favourite day in the masterchef kitchen. Next is Chloe’s Apple pie jaffle with creme fraiche. Gary says “oooo”, “how bloody good is that”. George says “oh my god”. Matt says it is one of the worlds best jaffles. It has a great crunch and fantastic flavour. George says it is tasty food and is speechless. Gary says it is one of the best dishes in the competition so far. 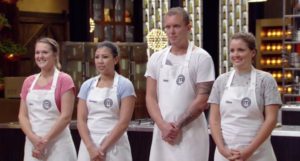 The winners of round 1 immunity pin challenge is Chloe and Matt. They have to cook against two chefs, Thomas woods and Hayden McFarlane, both from Woodland House. Chloe and Matt have 75 minutes and get to choose the ingredients. Thomas and Hayden get 60 minutes and don’t see the ingredients until they start. The judge lift the cloches and there is nothing under them. This means they are able to pick the two ingredients, one savoury and one sweet. Matt is going savoury, he chooses prawns. Chloe is cooking sweet and chooses raspberries.

For the Immunity pin, Chloe is cooking a rose water bavarois, which is a cold set custard. Matt is making hot and sour prawn head broth with prawn dumplings and crispy heads.

Thomas is focusing on savoury he is making king prawns glazed with white miso and prawn head broth. Hayden is making a raspberry vinegar jelly, white chocolate and goat’s curd.

First to be tasted is the White Miso Glazed Prawns in Prawn Broth. The judges comment that there has been a lot of effort put into the presentation. The judges taste, Gary says it’s very bitter. The other judges agree. Gary says its a pretty dish, the prawn is cooked beautifully, the broth is interesting but because the melon is so bitter, it spoils it. Next is the raspberry vinegar jelly and white chocolate. Gary loves it, it is a pretty dish, George loves the vinegar and Matt loves the aroma, the elements all tie together beautifully.

Next is Vrett’s hot and sour prawn head broth. Gary says its beautiful, it looks stunning. Matt loves the prawn heads, he says its a wonderful broth, its complex. George says you eat all of it and go “yum”.

Next is Chloe’s raspberry syrup with rose water bavarois. Gary says he likes the dish, the combination works brilliantly. Matt says it tastes like a pastry you would find in a french patisserie. Does he like it as much as the first dish? No, but he loves it as a dish all the same. Gary says it needs something to tie it together, like a short bread. It will be close.

Will Chloe and Brett win the immunity pins?

This means Matt and Chloe win the immunity pins tonight.