Tonight was Masterchef Marco Pierre White challenge. They contestants have to feed 120 people and replicate the dishes they were given. The losers will go into an elimination challenge.

Jessica, Sara and Georgia were the blue team. They had to cook an entree of prawns, lamb for main and a puff pastry dish. Matthew, Billie and Reynold were the red team. Entree was duck breast with tortellini, Snapper and a vanilla yoghurt sorbet and a berry jelly.

Marco was a tough chef. He came over to Matthew and asked him why he was using the wrong knife, told him to use a boning knife. 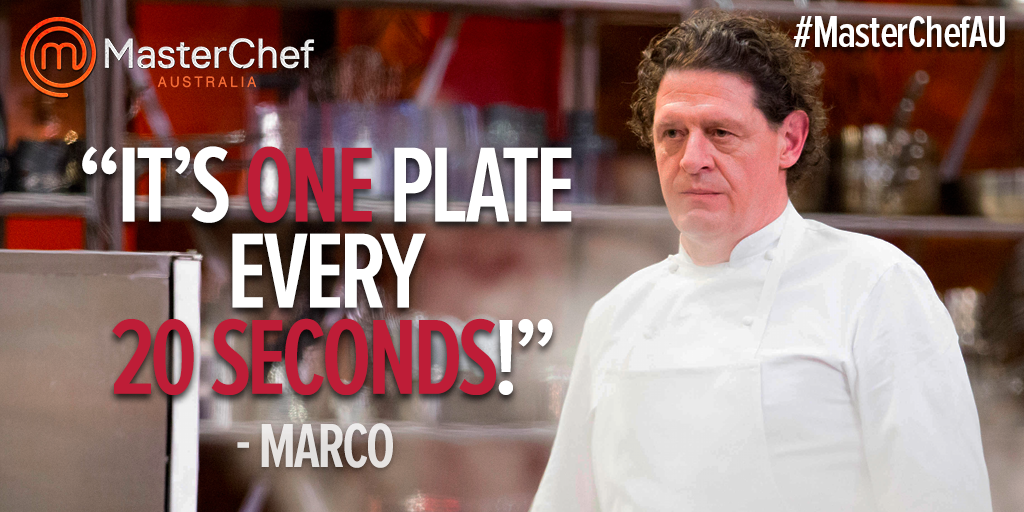 Jessica was cooking a lamb loin. She had to cut down 12 lamb necks and put them in a pressure cooker for 90 minutes. Marco came over and watched Jessica butcher the meat. Billie was making the snapper with a stuffed zucchini flower. She had 35 snapper to fillet and pin bone. Marco came over, noticing she was struggling and gave her some tips.

Georgia was cooking her peaches and was about to put her sorbet on the stove, she was moving on to the puff pastry. She made a really big mistake. She had put the pastry in the fridge, but realised there was still a lot of butter left. She hadn’t used enough and had to start the pastry again.

Marco asked the teams who was in charge, and to ensure every team member helped each other. Reynold came over and helped Billie with the pin boning of the fish. Meanwhile, on the blue team, Jessica was struggling with the lamb dish and needed someone to come and help her out, but everyone was busy.

Sara has finally organised her own dish and has time to help Jessica. She begins helping and then realises that she hasn’t butterflied her prawns, so Jessica gets no help.

Matthew and Billie are making tortellini together. Marco tells everyone to stop, and as they look up they see the guests arriving for dinner. Billie is worried that they have nothing ready for the entree or main. The restaurant is full and both teams are still preparing. Matthew decides that everyone needs to stop what they are doing to help him.

Sara is panicking and knows she wont get her dish out on time so she calls on Georgia to help her. There is only 5 minutes to go. Matthew starts cooking the tortellini and Sara starts cooking her prawns. There’s one minute to go. Then suddenly the orders start coming in from the restaurant and Marco starts calling them out and shouting quickly, quickly.

It’s time for the judges to taste the poached prawns with champagne butter sauce from the red team. George loves the butter sauce, so does Gary. However Gary says his prawns are definitely overcooked.

Suddenly Marco is told that the ravioli is undercooked in Matthew’s dish. Some dishes have been sent back. Matthew replaces the ones that have come back but is worried about the ones he has already sent out, especially the ones that are on their way to the judges.

Next up for tasting is Matthew’s dish from the blue team, duck breast in a golden broth and duck and ginger tortellini. George says there are some nice flavours in there. Gary questions whether his tortellini is cooked or not, the other judges are happy with theirs.

All of the entrees have been sent out. Georgia returns to working on her dessert. She puts her puff pastry into the oven and eagerly watches to see if it puffs up. Matthew and Reynold continue to help Billie prepare their main dish. However Reynold is worried that he is running out of time to prepare his dessert.

It’s time to get the mains out. The red team sends out their fish dishes but the blue team is still not ready and Marco is waiting impatiently for 4 serves of lamb. Jessica tells Marco that there is still a 5 minute wait for the dishes. She is clearly upset and flustered.

The red team continues to send out dishes. Their dish is delivered to the judges. Its a snapper with roast tomatoes and a zucchini flower. Matt says oh wow! George says it’s beautiful. Gary says it is just absolutely smashing. However George and Gary found a few scales.

The blue team is still trying to get their main ready. The lamb is getting cold while they organise themselves. They are finally ready to start plating and are able to send their mains out.

The judges are ready to taste the slow cooked lamb with asparagus and mashed potatoes. However, Gary says that it is not good enough that they waited so long and that the food was cold. George did comment that it was a tasty dish.

Sara and Jessica are still plating up and they suddenly realise that there are not enough mashed potatoes. Marco did tell Jessica earlier that she should always make a little more but she ignored his advice and followed the recipe exactly. She is worried about telling him. Marco tells them to use some pea puree instead, as they had some pea puree left over from the entree. Finally the main course is complete. It’s time for dessert.

Sara and Jessica get straight into helping Georgia. Reynold is concerned that he is not going to get everything done on time so Billie and Matthew begin to help him. He is concerned about getting his doughnuts done, I’m not sure if he is going to cook them or not or leave them off the plate altogether.

The dessert orders start coming in. The blue team starts sending their desserts out. The red team is also plating up and sending out dishes. They did not put the doughnuts on the plate.

The judges receive their first dessert from the red team. It’s a vanilla creme brulee with berries and a yoghurt sorbet. Gary notices that the doughnuts are missing. However, he really loves the yoghurt sorbet. Matt says it is all done really well.

Marco shouts out to Georgia and asks her where the peach sorbet is. She has forgotten about it and it is still in the freezer. She has left off an entire element. They start plating desserts with the sorbet, however they have already sent some out without the sorbet.

The judges receive their final dessert, a caramelised peach tart with peach sorbet. George says it is a good dessert. Gary and George both love the puff pastry and Gary really enjoyed the sorbet. Matt says Georgia has pulled one out of the bag.

The dishes all go out. Service is over. Marco says he is very happy with their performance overall.

It’s judging time. The dish of the day belonged to Georgia and therefore the blue team has won today. The blue team will be competing for the final immunity pin. The red team will find out tomorrow what their fate will be.