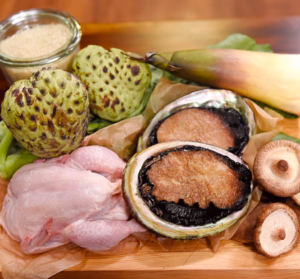 Tamara and Diana are cooking the abalone, neither have cooked them before.

Tamara wins the advantage with her abalone dish in the Invention Test. She gets to choose an element from one of Peter Gilmore dishes for the next challenge. She chooses Cherry Jam Lamington and Coconut Shavings.

Eliza’s dish, Strawberry sorbet with cucumber granita, is the first to be tasted. She makes her coconut shavings at the judging table with liquid nitrogen. George says it is as pretty as a picture. Peter says “wow, that is so good on every level”. Matt likes the softness of the jelly, the ingredients all go together. He says it is one of the best dishes she has ever cooked.

Next is Arum’s Smoked Chocolate Mousse. Peter says the coconut doesn’t work with the flavours. Matt says it derails the taste. He is in trouble.

Sarah’s dish, Scallops with Pickled Chilli and Lime Dressing could go either way. George loves it. He says it makes sense on the palette. Peter says it is an idea that is left of center and it works. Next is Nicole’s White chocolate mousse with blackberry centre and fennel syrup. Matt asks, is the dish better with the shards? The answer is no. Gary says it is ok but the coconut is lost.

Callan’s dish is next. He has cooked cherry ripe bicarb volcano. He pours the liquid into the bicarb to set off the volcano, but it doesn’t overflow. It was a good idea. The judges taste the dish. Gary says he likes the sorbet and the texture but the citric is a bit out of balance.

Diane struggled in her cook, but her dish is next. She didn’t get the sorbet up in her chocolate mousse. Peter says it is a classic marriage of flavour. Matt mentions that is might not be enough.

Eloise’s dish is the final one to be tasted. She has made Nectarines with Lemon Rosemary and Coconut. Peter says the elements work together well. Matt says she’s smashed it.