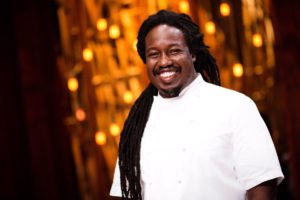 Who will be eliminated from Masterchef tonight? It’s a Pressure Test by Chef Paul Carmichael. Arum, Nicole & Callan cook in tonight’s Masterchef Elimination.

The contestants have 3 1/2 hours to cook three dishes by chef Paul Carmichael. It is also Callan’s first Pressure Test.

The main dish is a fish fry, followed by blood sausage, a roast pumpkin dish and a spicy cucumber drink.

First to be tasted is Callan’s dish. He struggled during the cook. He didn’t fillet his fish very well and it looked like mince meat in the end, but he got all the elements on the plate and to the judges.

The judges taste the dish. The accompanying drink is too spicy, and the flavours of the pumpkin could be better, but the fish is good. Even though it isn’t filleted properly it has good flavour and is cooked well.

Next to be tasted is Arum’s dish. His dish does not look good but he did get every element on the plate. The judges taste his drink, it is good. They taste the fish, it is nicely cooked. George loves the jam and Paul said this is more representative of him.

Nicole is last, she hasn’t got all the elements, missing the fish floss on the pumpink and the serves are smaller than the other contestants. Will she be eliminated from Masterchef tonight? They cut up the dish and Paul gets a massive bone. He says the fish is well seasoned, but there are plenty of bones. Gary likes the pumpkin, Matt agrees, it is spiced better than the other dish.

It is time for the judgement. The contestant eliminated from Masterchef tonight is Nicole.