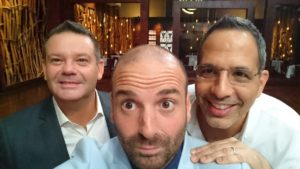 The Masterchef Elimination tonight is by Yotam Ottlenghi. The losers from the team challenge (the green team) are going head to head tonight.

The first round is a sight challenge. The contestants will see a thinly sliced cross section of an ingredient and have to get it right.

Arum, Samuel and Tamara now have to prepare for round two.

They get to use the pantry of the correctly named ingredients from round one and their normal staples which are under their benches. They have 75 minutes to cook a dish to keep themselves in the competition.

Samuel is cooking a vegetarian dish. A puff pastry tart with caramelised onions and tomatoes.

Arum is cooking a dessert with apples, something that reminds him of home.

Tamara is cooking a dessert as well, she is using nectarines. She is making a grilled nectarine tart with an ice-cream.

There’s 10 minutes to go and they are all finalising their dishes and preparing to plate up. Time is up! Who will be eliminated tonight?

It’s time for the judges to taste the dishes. Samuel is up first. He has made a caramelised onion and roast tomato tart with smoked ricotta. George says it looks lovely. They taste the dish. Gary says it’s delicious almost country cooking. Yotam says the ratio of filling to pastry is out.

Next up is Tamara, she has made a grilled nectarine tart. The are impressed with how it looks. The judges taste the dish. Gary says it’s delicious, George agrees. Yotam is not convinced of the flavour combination.

It’s time to find out who is going to be eliminated. Matt says all of the dishes were great but Arum’s stood out the most, he is safe. Tamara is safe, Samuel has been eliminated from Masterchef tonight.