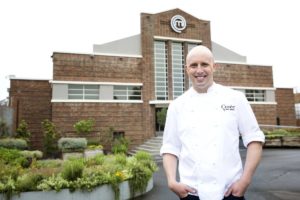 The Masterchef Elimination tonight is between Sam, Ray, Arum & Tamara. It is a pressure test by chef Deniz Karaca, a tart. The contestants have 3 hours.

Arum is the first to make a mistake. He has split the caramel cream, it has to be done again. With such a tight timeframe, will this send him home?

There are others making mistakes too, Ray’s caramel cream is slightly over whipped but he saves it. Tamara struggles with her toasted peanuts, but on Gary’s advice she gets it done. Arum successfully remakes his caramel cream but it has put him way behind. Tamara is also a bit behind, she is getting stressed and not coping with the pressure.

Who will be eliminated tonight?

There is 30 minutes to go. Sam is on to tempering the chocolate, he’s been doing pretty well in this challenge.

The contestants pour their mirror glaze over the tart, it looks good, they all get it done, but there is only 12 minutes left. 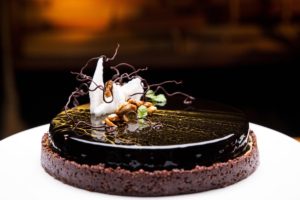 Arum has caught up, he has overtaken Tamara who decides to leave off her tempered chocolate twigs. Meanwhile, Sam has started construction but some of his elements are too runny. He puts it into the blast chiller to try and firm it up. Tamara puts her disc on the top of the dessert but the cremeux overflows. How is she going to fix this?

Someone is about to be eliminated from Masterchef.

Ray adds his top and also spills some of the cremeux. Sam is next, his does the same, his cremeux is too soft. Arum gets all of the elements on, so does Ray. Tamara is missing her branches but Sam gets all the elements on. Time is up.

The first dish to get tasted is Arum’s. Gary says the flavours are there, the tempered chocolate is great. Matt says he is quietly stunned by how he got it all together. Next is Sam’s. The judges cut into it and it is very soft. Matt says the thinness of the base is really good and the caramel is really good. Denise says he missed the passionfruit flavour, it is lost in the dish, its good but not great.

Ray brings his dish in. When the judges cut into it, it holds together. Matt says the texture is fantastic and the base is super fine. The tempered chocolate is professional level. I think Ray is safe.

Finally, Tamara brings her dish in. It is missing the tempered chocolate branches, the only incomplete dish tonight. Will Tamara be eliminated? The judges taste the dish. Matt says the peanuts are fantastic and the base is good. Gary likes the glaze. Denise likes it but it is not the same as his dish. There isn’t much cremeux as it flowed out the sides and the caramel is not caramelised enough.

Arum got dish of the day. Tamara has been eliminated from Masterchef tonight.