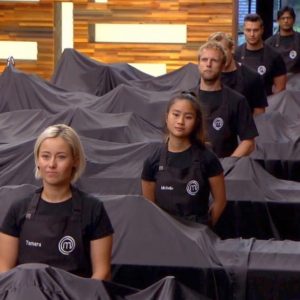 Tonight’s Masterchef Elimination is “Pot Luck”. The contestants pick a bench to cook at, covered by a black sheet. What could be underneath it?

The contestants peel back the sheet. Each bench has different ingredients and utensils. Some have meat, others have fish. Some have pots and pans, others have ovens. This is all they get to cook with. No pantry.

Who will be eliminated from masterchef tonight?

The contestants get cooking. Michelle is making crepes, Tamara has duck and a hibachi grill. Arum has beef and a skillet.

Matt made morton bay bugs. Gary says they are beautiful. George says, 3 or 4 ingredients cooked perfectly. Gary commends him on using the right stuff and cooking it in the right way. Matt agrees.

Tamara made duck breast with pine nuts. The judges love the dish, they like that she was able to use the hibachi grill, having never cooked on one before.

Sam made lamb rack with red onion puree and sautéed peas. The dish has some fruit, figs and peaches, but they don’t go with the dish at all. The lamb was cooked well, but the dish was a bit odd having the fruit with it.

Michelle made sweet ind crepe croqutte. The dish looks beautiful. George loves that there are three variations of apple in the dish. Gary says it is a great, simple idea.

Ray had a fryer and an oven. He has made fish and chips with caramalised leaks, fennel, orange & thyme salad. The judges ask what the “wow” factor is with the dish. The judges are not excited by the dish. Matt says he is surprised it is so “pedestrian”. Gary says they will have to taste a very bad dish to keep Ray in the competition.

Will Ray be eliminated from Masterchef? Arum’s dish is next. Seared byeef with mushroom puree and grilled onion. Arum had some issues with the cook. He forgot he didn’t have an onion and seared the beef but couldn’t cook it more. He split his sauce by taking it too far. He might be eliminated tonight. The judges get the dish. Gary says a lot of people like their steaks this rare. The sauce is very thick, like caramel. Matt says the mushroom puree is straight out of the 60’s, he doesn’t mind it. George says the sauce is acceptable. Gary says it is a great dish. Matt says lovely and retro. He might be safe from elimination after all.

Ray has been eliminated from Masterchef tonight.