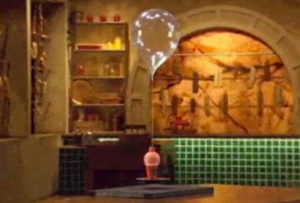 Who will be eliminated in tonight’s Masterchef Elimination? It is a challenge set by Christy Tania, a floating ice cream! It is Sam vs Bryan vs Trent.

The pressure test is to create a floating ice cream. The recipe is insane. Nobody in the competition has cooked something like this yet. The contestants get started. Bryan is the first to stuff up the recipe, he is making the semi freddo but half way through realises he’s done it wrong. He has no time to start again.

Trent is powering on, he gets his ice cream ball done.

Bryan is up to his chocolate, he needs to cool it down, it’s too hot. The others are powering ahead.

Bryan is feeling really low, he feels like he wants to give up. Christy tells him to focus and to hurry up. His chocolate is finally cool enough and he is happy with it.

Trent starts piping the pink on his ice-cream ball and it smudges. He wipes it and starts again. It’s not quite right again, he wipes it one last time and it still is not great. He decides he has to keep moving on whether it’s perfect or not.

Bryan is still running behind but is still powering along. There’s only 20 minutes to go. Will anyone finish their dish.

With 5 minutes to go they start to assemble their dishes.

Samuel fills his chocolate cones with the chocolate sauce but it was too hot and it has melted the cones. He’s quite upset. He decides to patch his cone with some extra tempered chocolate. Trent is having trouble getting his chocolate out of the piping bag. It’s panic stations everywhere! Nothing seems to be going right for any of the contestants.

Time is up! Who will be eliminated?

It’s time for Samuel to make his balloon. He has 30 minutes and the help of Christy. He makes his first balloon and it looks good until it gets a hole. He creates a second balloon and Christy ties it off for him. He attaches it to his ice-cream and takes it in to the judges. The judges taste the dish.

Next up it’s Trent. He is struggling to get the right consistency for his balloon mix. He tries to make his balloon anyways. He gets one small balloon but it breaks off and falls. He has 4 minutes remaining so he tries again. This is his last chance. He gets a small balloon and take his dish out to the judges. He pops his balloon as he places his ice-cream on the table in front of the judges. The judges taste it. Gary says the tempering of the chocolate has been done well. George says the chocolate sauce is great.

The judges call the three balls back in and announce who will be going home. Brian has been eliminated from Masterchef tonight.