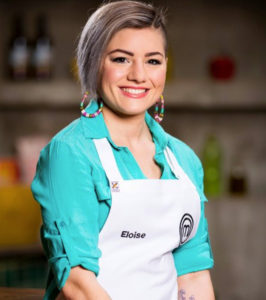 Tonight’s Masterchef Elimination is a blind taste test. The losers from last night’s challenge (the blue team) will be fighting to stay in the competition.

Eloise has an immunity pin, will she use it? It is still sweets week. The challenge will be two rounds, the first is a taste test, the first three contestants to get it wrong will go in to round 2. In round 2, the contestants will cook with the ingredient they tasted and identified wrongly.

Who will be eliminated from Masterchef tonight? Not Eloise, she uses her immunity pin.

The ingredients are starting to get harder. Callan tastes his ingredient, its fruity. He guesses dates and is correct, it was close, it could have been prunes. Next is Benjamin, he guesses rockmelon but it is banana, he is next to go to round 2. All the contestants have had one turn, it’s back to Tamara. She is not sure, it has a subtle taste. She guesses rock melon but it is cucumber.

The contestants into the next round are Ray, Benjamin and Tamara.

Tamara is making a parfait with her cucumber.

10 minutes into the cook, Ray is still in the pantry, he doesn’t know what to cook with grapes. He is in trouble.

Will Ray be eliminated from Masterchef tonight? He is finally out of the pantry and is inspired by a cheese tasting board. He is making a goats cheese platter with various forms of cooked grape dishes.

It’s time for the contestants to start plating up, time is running out. Who will be eliminated? Tamara seems to have everything under control but Ryan and Benjamin are struggling. Ray is not happy with how he is plated his dish up so he decides last minute to do it again. Will he have a dish plated up in time?All of the contestants plate their food up in time.

The judges are ready to taste the first dish. Tamara has made a yoghurt parfait with cucumber five ways. George says it’s yum and he loves it. He says it’s not too savoury. Matt loves the freshness of the cucumber. Gary loves it too. It looks like Tamara is safe tonight.

Next up is Benjamin. He has made banana pancakes with a choc mint ice-cream and chocolate sauce. George loves the chocolate sauce. Gary likes the texture and silkiness of the ice-cream but he has overcooked the bananas and that makes it unpleasant to eat.

Finally it’s Ray’s turn. He is not feeling very confident with his dish. Gary says he thinks it is delicious. George says he thinks the dish shows how far Ray has come in the competition.

It’s time to find out who is going to be eliminated. Benjamin has been eliminated from Masterchef tonight.