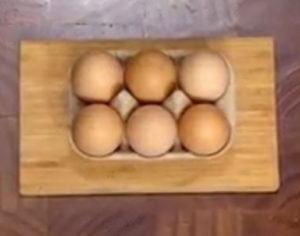 Masterchef Elimination tonight requires the contestants to use eggs. They have six eggs for the whole challenge and there are three rounds. Each round must feature an egg.

There are Mee Goreng, Scotch Eggs and many other egg dishes being cooked. The contestants are all aiming to be safe after round 1, some using more eggs in this round than others.

Pete tries to boil his egg but it cracks as he drops it into the water. He makes another one and puts it more gently into the pot this time.

The first contestant to be tasted is Michelle, she made Mee Goreng with only one egg. Gary thinks it is really tasty, he liked the presentation of the egg on top. George agrees.

Next is Pete’s dish, it is a poached egg, but when the judges cut it, it is not cooked through, just a little more time would have made him safe from elimination.

Jessica used three eggs for her dish, but her egg wasn’t runny, this could be sending her to elimination.

The contestants safe in the first round are Ben, Michelle and Nicole.

It is round 2, the contestants have 45 minutes to cook in this round and must use the same eggs from round 1, most people only used a single egg in round one, but Jessica used three so she only has three remaining.

In judging, Samuels dish is first, a tuna dish with a soft boiled egg. George thinks it is a confident dish, the tuna is cooked perfectly, it was a “great plate of food”. I think Samuel might be safe from Masterchef elimination.

The contestants going into Round 3 are Jessica, Callan and Pete.

Jessica’s dish is first to be tasted. It is a Panko Crumbed Egg with Nam Jim sauce and a Rice Paper Roll. She had issues making the egg, the shell cracked in the boiling water and she has tried to save it by coating it in crumbs. Will she be eliminated from Masterchef tonight? The judges cut into her egg… It is well over cooked. She could be going home. Gary says he’s not really impressed, the flavours is flat. George agrees, he says she is in trouble.

Next is Callan’s dish, Lamb Tartare with Raspberry Granita, Popcorn and Smoked Egg Yoke. The judges are baffled by the dish, it could either be really good or really bad. Matt says it goes together way, but its strange. Gary says because he’s salted the meat its continued to work it, we don’t know if this is good or bad at this stage.

Next is Pete’s dish, Steak, Eggs and Chips. It is his fourth time in elimination. The judges taste his dish, the steak is cooked well, he loves the egg and the chips, there isn’t much to knock on this dish. Gary says he likes cooking dishes like this and he is good at it.

Who will be eliminated tonight? The verdict is in.

Jessica has been eliminated from Masterchef tonight.