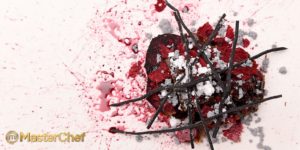 Tonight’s Masterchef Elimination is a pressure test between Jess, Sam and Trent. It is a challenge set by Josue Lopez. It is a taste of Australia. It contains several emu elements including emu feather pretzels and emu jerky. The dish is called “After the Eucalypt Fire”, it looks like a work of art.

The contestants have 3 hours to recreate the dish. Who will be eliminated from Masterchef tonight?

There are 14 different elements. The contestants all read through the recipe first, then start with the emu jerky.

Sam seems to be doing his components in a different order to the other contestants, he is falling behind. At the half way point he has hardly completed any elements, Gary, George and Josue all try to get him to hurry up. I think at this point he isn’t following all the steps in the recipe.

Jess and Trent are powering through, but this is a tough challenge, will they make it? Who will be eliminated from Masterchef tonight?

Just then, Trent may have missed a step – his beetroot puree and Jess leaves the stalks in her puree, it is too bitter. Sam is slowly catching up.

Time  is running out and Jess starts plating up, Sam follows closely after. Trent is struggling. He plates up with a minute remaining.

Time is up. It’s time for the judges to taste the dishes. First up it’s Sam’s dish. The judges comment that the meat looks well cooked. George says the flavour of the beetroot is yum but the texture is not right. Next up is Trent’s dish. The judges are not very impressed with the presentation of the dish. They comment that he has cooked the Emu fillet well. Gary says he is missing all of the crispy and crunchy elements. Finally they taste Jess’ dish. The judges comment that she has cooked the meat well. Gary loves all the crispy elements and says the beetroot puree is delicious. Matt comments that the leaf puree is not quite right.

Who will be eliminated tonight? Gary says Sam’s dish was the best of all three and he is safe. Gary says Jess’ beetroot leaf sauce was bitter and Trent’s dish was missing the crispy elements. Trent has been eliminated from Masterchef tonight.