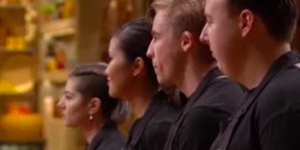 The Masterchef Elimination tonight is different to the others. Several sets of ingredients will be revealed in 15 minute intervals. Who will be eliminated?

The first pantry ingredients are herbs and spices, nobody starts cooking. 15 minutes later, the second pantry items have been revealed, they are fruit & vegetables. Eloise jumps at this opportunity and starts cooking. After 5 minutes, Sam also starts his cook. This means they can only use fruit & vegetables and herbs in their cook (apart from standard milk, flour, sugar and egg ingredients).

After a few minutes Callan also jumps in to start cooking. He too only gets herbs and fruit and vegetables. The last contestant left is Diana, she is waiting for the third set of ingredients.

Sam, Eloise and Callan are all making ice creams, this will make it tough as the judges will basically be comparing ice creams. The third set of pantry items are revealed, Dairy and Sweets. Diana was holding out for a protein, she is devastated, she decides to wait another 15 minutes. This is a big risk as she will only have 30 minutes to cook.

It is time for the fourth set of items, protein. Diana is off, she only has 30 minutes to cook. She is making a chilli paste fish (red emperor) with herbs on the side.

Cooking time is up!

It’s time for the judges to taste the dishes. Diana is up first. She has cooked a piece of Red Emperor fish with a spicy sambal. The judges like the way the dish look and are eager to taste it. The judges love the dish, Gary says it makes him so happy, he says the fish is perfectly good. George says it’s yummy, and Matt says it is plate scrapingly delicious.

Callan is up next. He has made a coriander ice-cream with a spiced brik pastry and coriander leaves. Gary taste the sauce, he does not like it at all. George says the dish looks pretty but it has problems. Gary says he gets points for his high level of presentation. George says it was an ambitious dish. Matt says sadly the ingredients don’t go together. George says he’s in trouble.

Next up is Sam. He has made strawberries with watermelon and basil. It doesn’t look appealing to them. The judges taste the dish. Matt says the flavours go together at least. Gary says the granita is wrong as it’s melted everywhere and George doesn’t like the meringue.

Finally it’s Eloise’s turn. She has made an ice-cream sandwich with a beetroot caramel. The judges say the flavours all go together well and they like the dish.

So it looks like either Sam or Callan will be going home. Who will be eliminated tonight?

George announces who is safe tonight, Diana and Eloise. Sama and Callan are remaining. Sam has been eliminated from Masterchef tonight.