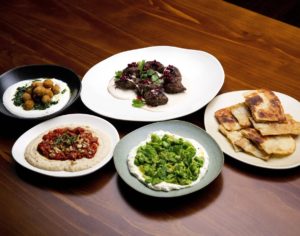 Tonight’s Masterchef Elimination is a 5 dish pressure test by Yotam Ottolenghi, contestants have to cook all 5 dishes in order to stay in the competition.

As a kicker, the contestants only have 60 minutes to make all the dishes. This is going to be a hard elimination challenge.

It is Pete, Eloise and Ray in the pressure test tonight, Who will be eliminated from Masterchef tonight? The contestants are neck-a-neck, but the first person to make a mistake is Pete. He accidentally mixes his yoghurt into the wrong dish and has to redo it. There is not a lot of time for mistakes tonight.

Ray is powering ahead but he is lacking attention to detail, he isn’t tasting the dishes as he goes and he is rushing some of the steps.

George is really concerned at how roughly Ray has chopped his onion for his koftas. Eloise has plated up her koftas and Pete has taken his out of the oven but is leaving them in a hot pan, he runs the risk of them overcooking.

Eloise is getting quite stressed, she is rolling out her flatbreads. Pete also gets his flatbread into a pan. Yotam walks past and warns all the contestants to not overcook their pomegranate jam. Ray is still running behind. Eloise is panicking as she has two dishes to make and only 6 minutes left on the clock. Eloise has knocked something off her bench, she calls out and asks if it is one of her completed dishes. She is too busy cooking to go around her bench and check. There’s 3 minutes remaining. Pete is plating up his dishes. No-one seems to be able to find a fork in the Masterchef kitchen. Ray uses a mortar and pestle instead and Eloise uses a whisk. Time is up! Eloise is relieved to find she only knocked a jug off her bench and that all of her dishes are safe and ready for tasting. Everyone managed to plate up their dishes on time.

It’s time for the judges to taste the dishes. First up it’s Pete’s dishes. He is a little concerned about the presentation of his dishes. Gary loves the bread and the olives. Yotam agrees that the bread is good. George is concerned about the kofta. Ray’s dishes are next. Gary thinks the dishes look nice overall. The judges taste the dishes. George says there are things he loves and there are things he doesn’t like at all. Gary says some things lack seasoning. George doesn’t like the big lumps of onion in the kofta. Finally it’s Eloise’s turn. Gary thinks her dishes are plated up beautifully. The judges taste her dishes. Yotam says overall it’s brilliant. He is very happy with the flavours and the seasoning. Gary loves the olives. George enjoyed the butterbean hommus.

It’s time to find out who will be eliminated tonight. Yotam tells Eloise that she nailed the dishes tonight and that she is safe. So it’s now between Pete and Ray. Pete has been eliminated from Masterchef tonight. Gary tells him it was simply because of his plating up.