Home » Masterchef 2016 » Who Comes Back on Masterchef? 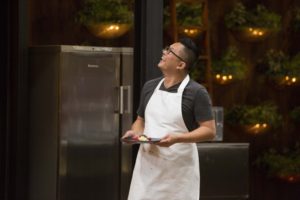 The top 12 remaining contestants arrive at Masterchef headquarters. Anastasia is standing out the front and is dressed in her power apron. And the doors open and the 12 eliminated contestants arrive. The current contestants head upstairs as they are not cooking today.

The 12 eliminated contestants have to cook a dish from a special pantry designed for them. Wine, rosemary, raspberries, dark chocolate, cardamon pods, lemon, greek yoghurt, lamb and beetroot. Anastasia has the power apron, she gets to choose an eliminated contestant to come and choose another ingredient. Anastasia picks Theresa to choose the ingredient and she runs to the pantry to get some coconut.

Time begins. Theresa is making a dessert called Winter. It is made up of white chocolate, coconut, lemon and a raspberry sphere. Charlie is making a dessert too, a chocolate mousse. Cecilia is making a yoghurt sorbet with a curd. Miles is making a chocolate and beetroot parfait with some wafers. Theresa has mapped out her dessert on paper but she has not started yet, she is now worried that she’s not going to get it all done on time. 10 minutes later and she finally gets started.

Zoe is making a beetroot bavarois. She is wondering if she should make a tempered chocolate disk to put on top, Gary and George tell her to go for it. She does decide to melt her chocolate today in the microwave instead of over a double boiler.

There’s 30 minutes remaining. Zoe takes her chocolate out of the freezer, she cuts a circle out and tries to peel it carefully off the acetate but it breaks. She decides to use another cutter and make it a half moon shape. Cecilia has decided to make a cardamon tuille to add to her dish. Miles cuts into his parfait but it’s not set so he puts it straight back into the blast chiller. Charlie takes his chocolate mousse spheres out of the freezer and they’re perfect. There’s 15 minutes remaining. Cecilia is also making some springs out of hot sugar. It’s time to start plating up and the contestants are madly rushing to get it all on the plate. Time is up.

Who Comes Back on Masterchef?

The first dish the judges taste is Cecilia’s. She has made a yoghurt sorbet with a beetroot curd. The judges taste her dish. Gary loves the beetroot sauce and the yoghurt sorbet. Matt says he really loves it and thinks it’s a sophisticated dessert. Miles is up next. He has made a beetroot parfait and a raspberry jelly. Gary says it’s a shame his parfait hasn’t set. Shannon says the chocolate parfaits is really delicious. The other judges agree. A few more contestants dishes are tasted. Next up is Charlie. He has made a chocolate mousse sphere. George cracks the chocolate mousse sphere open and you can see the raspberry filling inside. George says he loves the mousse and the crumb. Gary says he has nailed the dish and it’s delicious. Next up is Zoe. She has made a beetroot bavarois. The judges complement her on her tempered chocolate then taste the dish. Gary likes it, he says it’s really delicious. George says he likes it but would like some more chocolate flavour. A few more dishes are shown quickly. Next up is Theresa. She has made a yoghurt rosemary snowball with chocolate raspberry balls. The judges taste the dish. Shannon says she has shown a good level of skill and he likes it. Gary says he thinks the dish is fantastic.

It’s time for the judges to decide who will be coming back into the competition. It is between Cecilia and Theresa. The person returning to Masterchef tonight is Theresa. Theresa has come back on Masterchef.

Theresa also get the power apron for tomorrow night.

One thought on “Who Comes Back on Masterchef?”