Home » Masterchef 2016 » What are the MasterChef Mystery Box Ingredients chosen by the viewers? 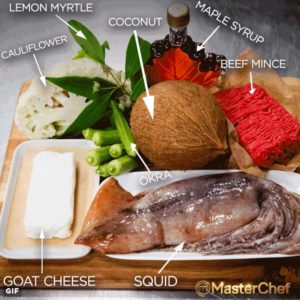 Tonight is the MasterChef Mystery Box challenge and it is the first time that the ingredients have been chosen by the viewers. What are the masterchef mystery box ingredients? Tonight it is Cauliflower, Maple Syrup, Coconut, Goats Cheese, Okra, Lemon Myrtle, Beef Mince and Arrow Squid.

There are a few interesting ideas. Con is making a maple syrup custard and salad, but it’s not coming together. He’s giving it 5 more minutes before he tries something else. Chloe is making nougat and really wants the judges to taste her dish.

Con is worried as his custard is not going to set with 20 minutes remaining. Karmen is making a dessert today. She is making a maple crumbed lemon myrtle parfait. She is hoping that her parfait will set in time.

Chloe is happy that her nougat has set. Anastasia is cooking maple syrup squid. She is torching her calamari with a blow torch. Heather is hoping to serve her calamari in the half of the coconut. George says he hates the idea. She has to change her plan. There is only 15 minutes left on the clock.

Matt is frying his squid in the deep fryer. The contestants are quickly plating up their dishes with only 5 minutes remaining. Every contestant in the room is hoping their dish will be tasted today. The judges are only going to taste 5 of the dishes. As the judges count down to 1 Chloe falls near the freezer as she was rushing to get her frozen nougat out. She does not get her nougat on the plate and she is disappointed.

The first dish the judges taste belongs to Karmen. She has made a maple crumbed lemon myrtle parfait. The judges taste the dish. Matt says it’s quite a beautiful dessert. He says welcome to the competition. The judges like the dish. Next up is Con. He has made a cauliflower salad with a maple foam. The judges taste the dish. George loves the presentation but the let down is the foam as it tastes eggy. Next up is Heather. She has made a maple and coconut crusted squid with pickled cauliflower. George says it’s a comforting and warming dish and it makes the judges happy. Gary loves the crunch of the crumb on the squid. Matt says it’s a hard dish to beat. George says welcome to Masterchef. Next up is Matt. He has made coconut salt squid with charred okra. Matt the judge says is there anything creamy to dip the squid into, and he replies no. Gary says it could be the battle of the crunchy squid today. The final dish they are going to taste tonight belongs to Anastasia. She has made torched maple syrup squid. The judges are impressed with her presentation. Gary absolutely loves it, the maple syrup flavours and the scorched squid. Matt says this dish is pure elegance. George says it’s a really clever dish. It’s yum.

Now it’s time to find out who the judges have picked as the best dish.

The judges choose Anastasia’s dish. She has the advantage going into the next challenge. She is taken into the pantry in front of three cloches. She gets to choose between peanut butter, marmalade or vegemite. She chooses marmalade. 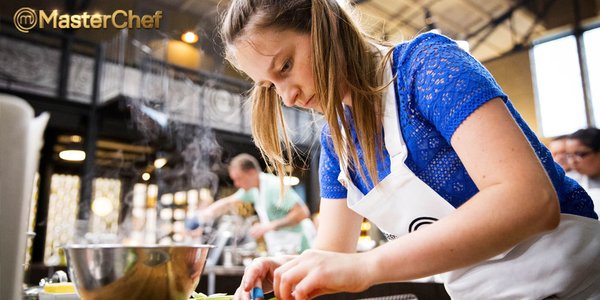 Anastasia is making a spanish inspired dish, orange quail with an orange and almond salsa.

Chloe decides to blend her rice. As soon as she starts blending it she things “What have you done?”. It looks terrible.

The time is going fast. Karmen is making a marmalade custard in a tube. Gary suggests making two incase the first one doesn’t work. She makes a second tube. When she goes to pour the custard into the tube, it just leaks out. She tries the second one, same thing. There is 15 minutes to go, what is she going to do? She manages to balance it on the dish and puts it in the fridge.

Chloe’s marmalade gel isn’t setting, she realises that she has used the wrong ratio of agar.

Con is making poached peaches with a soil.

Karmen takes out her tube with custard. She cuts the tube moulding and the custard just gloops out everywhere, it is a sauce. She has no plan B.

There is only a couple of minutes to go, the contestants are struggling. Time is up.

Karmen’s dish hasn’t worked at all, she is upset.

The first dish to be tasted is Matt’s Orange and ginger pudding with spiced marmalade syrup and earl grey ice cream. Gary likes it, the texture of the sponge and the combination of the flavours is delicious.

Next is Karmen’s ginger custard with a sponge. The judges say “woah”. The can see she struggled with the dish. Will she be bottom 3? Matt says “its just custard and crumbs”.

Next is nicollete’s orange marmalade and cardamom. Gary says it makes him happy, Matt says its a potential top 3 dish.

Chloe’s toasted rice putting with marmalade gel and macadamia mix is tasted. George says it has a funny flavour but it is probably due to the texture. Gary says you have to do things like this to learn from it. He says she might be in the bottom 3.

Olivia’s blood orange sponge is a little dense, the sorbet is icy but the candied orange is delicious. She had some obvious problems. Trent’s marmalade pork was good. Cecilia’s parfait is good. Heather’s ginger glazed quail is delicious.

Miles is a bit ashamed of how his dish presents. George says it doesn’t look great. His dish, stuffed quail with marmalade glaze and balsamic fennel, was cooked well, but he struggles with finesse.

It’s Anastasia’s turn with “Quail de naranja with salsa and quail eggs”. Gary says it looks smashing. He says he loves it, it ticks all the boxes. The complexity is there and the quail is cooked brilliantly. George says “wow”. Matt says everything about this dish is right.

The top 3 are Anastasia, Con and Nicollete. They get to compete for the Masterchef immunity pin this week.

The bottom 3 contestants, and going to the MasterChef elimination tomorrow night are Karmen, Chloe and Olivia.

One thought on “What are the MasterChef Mystery Box Ingredients chosen by the viewers?”