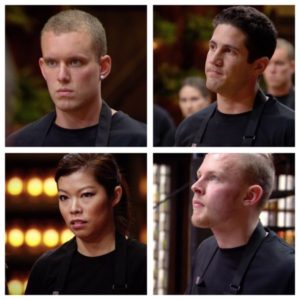 The blue team from yesterday’s challenge is in the Masterchef kitchen in their black aprons tonight. Tonight’s elimination has two rounds.

The first round is the alphabet game. Underneath each cloche is an ingredient that corresponds to the alphabet letter.

Miles starts with letter B. He says basil and it’s correct. Anastasia choses D. She says dijon mustard and is right. Matt choses M. He says mirin, it’s correct. Con chooses C for celeriac. Adam chooses R. He says it’s like a lychee but has no idea what it is. He is the first person trhough to the elimination round. Zoe choses Z. It’s zucchini. Cecilia choses L for lamb. Harry choses T for tuna. Trent choses G. He says green tea and is correct. Olivia choses F. She says farrow and is safe. Miles choses H for horseradish. Cecilia choses J. She doesn’t know the word for it. Cecilia is also in the elimination round. Anastasia choses I. It looks like some sort of berry. She says Inca berries. Matt is left with letter U. He has no idea what they are. He doesn’t have an answer. They are a Japanese cooking ingredient.

There is now a second round of ten more cloches. Harry is up first, he choses C. It’s a piece of white fish, he choses cod but it’s crocodile. He is now the fourth and final contestant in the elimination round.

The four cooks cooking off are Adam, Cecilia, Matt and Harry. They have 60 minutes to give the judges are a delicious dish. They get to use all of the ingredients they chose correctly in the first round and the usual pantry staples.

Matt is making a deboned quail with a celeriac puree with a char grilled zucchini.

Adam is making a mix grill with a fresh salad and some char grilled zucchini.

Cecilia is making a coleslaw with the celeriac and has some fish to cook too.

The judges go to Adams bench and tell him that they don’t think what he is cooking is really a mixed grill. George give him some suggestions to make his dish more impressive.

The judges visit Cecilia’s bench. They notice that she looks totally confused.

Harry is attempting to make a mayonnaise but it’s not working out. Marco tells him to throw it away and to start again. Harry quickly runs to get more eggs to make another lot of mayonnaise. This time it works out as he is hand whisking it.

The judges go up to Matt’s bench. They say that one quail for four judges is not really enough. He decides to debone one more quail even though he is pushing it for time.

Matt finishes deboning the quail and finally gets it into the frypan.

Marco talks to Cecilia and brings her to tears. She decides to cook some seared tuna instead.

The contestants plate up their dishes and finish on time.

First up is Matt, he brings his quail dish to the judges. Gary says the colours on the plate are lovely. Marco says he loves that he has given them two quails. They cut into it and it’s cooked beautifully. Marco says it is delicious. George says he has picked a great combination of ingredients. Matt says it is one of the nicest dishes of the season so far.

Adam is up next. He has made a duo of grilled lamb, grilled zucchini and a salad. The judges taste the dish. Gary says there’s nothing exciting about the dish. Matt says the backstrap is beautifully cooked. He likes the combination of lamb fat and inca berries in the salad.

Next up is Harry. He’s made a smoked and seared tuna fillet. Marco says it’s nice and delicate. Gary says he loves it, he thinks it’s great.

Cecilia is the last contestant to take her dish to the judges. The ask straight away if she thinks if she’s done enough. She’s made a seared tuna with a salad. Marco says that Cecilia amazes him. Gary says there are some good flavours in it. Matt says the tuna tastes great. Gary says he doesn’t like how eggy the mayonnaise is.

It’s time to find out who is going home in tonight’s elimination.

Gary says Matt and Harry really impressed the judges with their dishes tonight. So now it’s between Adam and Cecilia.

Adam has been eliminated from Masterchef 2016.

Next up is a special masterclass with Marco Pierre White at Werribee Park Mansion. He is going to cook a risotto and some arancini with the leftovers.