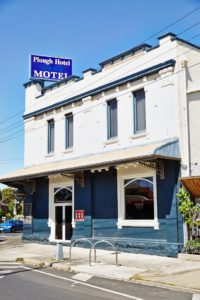 Today’s challenge is set at the Plough Hotel in Footscray. It’s a team service challenge and Marco is running the pass.

The contestants are standing in a line and George splits the line in half and half is now the red team and the other half is the blue team. Captains have been chosen. Each captain gets to pick a card from three jars.

They have to cook enough food for 70 people, three hours of prep time then service begins. The losing team goes into tomorrow night’s elimination challenge.

The blue team is negotiating with Nicolette on the entree. For entree they decide on crumbed prawns.

The red team is negotiating with their captain. For entree it’s skewered prawns, the main is sirloin steak with a jus, and dessert is warm chocolate brownie with salted caramel sauce.

The blue team goes into the cool room to find their prawns for entree but realise that the red team has already taken them all so it’s back to square one. They decide to use scallops for their entree with a pancetta crumb. For main they are cooking crispy skin King fish with potatoes, dessert is a vanilla bean panna cotta.

The blue team plans on serving only three scallops for their entree, Marco questions them asking would you be happy with three tiny scallops.

Both teams are busily prepping their meals in time for service, everyone is working really hard.

The guests begin to arrive. There’s five minutes before service time. The judges are seated and waiting to be served. Service time has begun. Marco starts barking out the first orders.

Marco questions why the blue team has begun cooking their fish when he hasn’t asked them to. The first dishes start going out. The red team is a little behind on the prawns.

The judges receive their first dish, the prawns from the red team. Gary says it’s really good, two thumbs up. Matt says it’s a clever dish. George says he actually felt as if he was just going out for lunch.

The blue team is behind now on sending out their scallops, they are worried that some are overcooked and some are undercooked.

The judges receive their scallop dish from the blue team. Straight away the judges have an issue with the dish. George says that the dish is quite ungenerous in size. The scallops are overcooked. The judges comment that the red team win the first round.

The orders for main start coming in. Marco is yelling where is the Kingfish. The steak mains start going out and so do the fish mains eventually too.

The judges receive their steak main meal from the red team. Gary says the jus is missing, there’s hardly any on the plate. George agrees that the jus is non existent, he wonders why they removed all the fat from the steak. Matt says it’s a disappointing dish.

The blue team suddenly realises that they have run out of fish somehow. Marco yells for the fish. The blue team is in real trouble. Marco has found out and they just don’t know what to do. They quickly start filleting a couple more fish from the cool room. They fillet the fish as quick as possible and manage to get some more dishes out.

The judges receive their fish from the blue team. Gary says he is surprised, his fish is really well cooked and his potatoes are crunchy. George says this team has stepped it up since entree. The blue team has definitely won the main course round.

It’s dessert time. The red team is plating up their warm chocolate brownie with caramel sauce. It looks lovely, Marco says he is looking forward to trying it later.

The brownie arrives on the judges table. George comments that it is a generous serve. Gary loves the brownie. Matt says it’s a moist brownie and he loves the hazelnut crumb.

The blue team begins plating up their dessert. It’s a panna cotta with pineapple and a lime gel. Marco comments that it looks very nice.

The judges receive their panna cotta from the blue team. They taste the dish. George says its a beautiful elegant dessert. Matt says he really likes it, they’ve contrasted the textures well.

It’s the home stretch and both teams keep plating up their desserts. They finish their service and are feeling quite relieved.

It’s time for the judges to decide which team will be going into the elimination tomorrow. It all comes down to the dessert.

It’s time to find out the results. Matt says the panna cotta was his dish of the day. Gary and George say the prawns were their dish of the day and that is why the red team has won the team challenge today. The blue team will be in an elimination tomorrow.