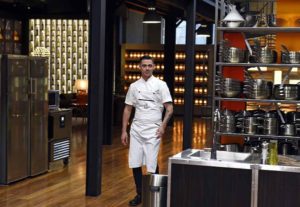 It is the first masterchef immunity pin challenge for MasterChef 2016 and it is Olivia, Nidhi and Zoe cooking off to win. Who will win? The contestants have to cook pasta and a sauce in the first round. The winner will be cooking against Jake Kellie of the Estelle in Melbourne. He is the young chef of the year at 24 years of age.

The contestants have 60 minutes and an open pantry to cook their pasta and sauce.

With the first 15 minutes down, Zoe has finished kneading her dough, Nidhi is struggling. She has to start again. Olivia also gets her dough in the fridge to rest.

Zoe moves on to her pumpkin filling. Nidhi finishes her pasta and moves onto a crumbed bacon. Olivia puts something in the oven, the judges are confused. It’s bread. She is really trying to impress the judges.

Zoe checks on her pumpkin, but it’s not cooking in time. She’s cut the pieces too big, she takes them out of the oven, cuts them up and puts them in the pan.

Olivia has zoned out and is making her pasta, but she’s forgotten to get her water on the stove. The peanut gallery call out, but there is only 15 minutes to go, will she be able to cook them in time? Has she wasted time making bread?

Zoe tries her filling, it tastes too strongly of goat’s cheese, she decides to add some honey to sweeten it up.

Meanwhile, Nidhi’s pasta is all different sizes, they will all cook differently. Olivia’s water still isn’t boiling. She takes the bread out to make her crumb. She whizzes it up with the pancetta and tips some water out. Zoe has her water ready, she puts her ravioli in. There is two minutes to go, Zoe starts plating, her dish is looking good. She runs to the pantry to get some parmesan.

Nidhi drains her sauce, takes her ravioli out, but it isn’t looking great. With 30 seconds to go, Olivia takes out her ravioli and quickly tosses them in burnt butter sauce, it’s into the bowl with the crumbs on top. She is worries she didn’t use enough of her sauce in the rush.

First to be judged is Olivia. The judges comment on the missing sauce. Her dish is Pumpkin and Thyme Ravioli with a Burnt Butter Sauce. Marco says it is a very pretty dish. Gary says the ravioli themselves look very nice. Shannon says it matches the brief, the ravioli is nice, but it has a slight greasiness. He liked the addition of the bread. Marco says this dish tells him a lot about her. It was a very clever dish, but needed the butter to absorb the crumb.

Next is Nidhi’s dish, Mushroom, ricotta and bacon ravioli with porcini broth with some sage butter. Gary comments on the ravioli being uneven. Matt says the sauce is good but the pasta is too thick. Marco says he likes the use of butter over the broth, it is very clever but it is not her best dish.

Finally, Zoe’s roast pumpkin and goats cheese ravioli with speck, sage and butter sauce. George likes the look of the big chunks of bacon. Matt says he loves it, he absolutely loves it. It has a good nutmeg flavour, there is a good amount of butter at the bottom, its a cracking dish. Gary says when you eat it together it works perfectly. Marco likes that she hasn’t over cooked the bacon. She has won the chance to cook against Jake Kellie for the Mastchef Immunity Pin.

Zoe has 75 minutes to cook a dish and Jake will have 60 minutes. This year, the guest chef won’t see what they have to cook until it is there turn to start cooking. Zoe can choose the theme, either French or Italian. Zoe chooses Italian and is going to make a creme brûlée with a marscapone ice cream.

It is time for Jake to start cooking. He is cooking a beef dish by butterflying a steak, freezing it, then he will torch it at the end and hide the vegetables under it. Zoe is happy with her mascapone ice-cream and she puts it into the freezer. Shannon shouts out that there’s 30 minutes remaining. Zoe tastes her figs, they’re firm and sweet and delicious. Jake cuts up some olives to add an Italian element to his dish. Jake asks  Zoe what she is cooking, and he questions whether her cold brulee will set in time.

Jake starts plating up his dish, he is carefully doing it with tweezers. He torches his meat and places it over the top of his vegetables, it looks a little strange. Zoe takes her brulee out of the fridge and it is set to her liking. She starts to caramelise the sugar but she is running out of time and she worries that she melted the gelatine underneath with the blow torch. Time is up.

The first dish presented to the judges is Jake’s. It’s the veal carpaccio. Marco says it was not what he expected, he is totally shocked. George takes the dish apart and it still looks strange. The judges taste the dish. Marco says the dish is beautiful in the most ugly sense. Gary says where’s the pop? Matt says it’s missing a squeeze of lemon juice. Next up is Zoe’s dish, it’s a marsala brulee. As the dish is topped with the figs and ice-cream the runny gooey bottom floats to the top and the judges can see that the dish is not set. The judges are concerned that the brulee top is now wrecked. George serves up slop like portions to the judges. The judges like the flavours but all admit that it’s not a brulee. Marco says that was the most confusing tasting he has done. It’s hard to tell who will win tonight, both dishes had their negatives.

It’s time to find out the scores. Zoe is first.

Next up is Jake

Total score of 25/40. Jake wins in the immunity pin challenge today and Zoe will not be getting the pin tonight.