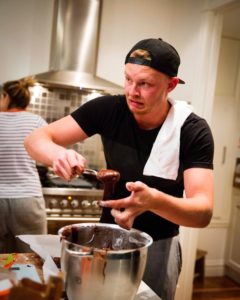 Tonight on Masterchef Matt Preston and Nigella Lawson arrive at the Masterchef house and wake up Mimi, Harry and Karmen. They want them to cook a midnight feast, one of Nigella’s favourite things. Nigella is looking for the contestants to cook something bold and pleasurable. The contestants have 30 minutes to cook something for a midnight snack. The winner today gets to battle off in the Masterchef kitchen against the guest chef for the immunity pin.

Harry is making brownie style cookie. Karmen is making a breakfast dish, fried chicken with waffles. Mimi is making a brioche french toast with maple bacon. The other contestants in the house wake up and come downstairs to watch the cooking competition. Harry is really worried that his cookies are not going to cook in time. He decides to turn the temperature up in the oven so that his cookies have a chance to cook. He also whips up a frangelico cream.

First up Nigella gets to taste Mim’s brioche French toast. Nigella says it’s a worthy contender. Next they taste Karmen’s dish for waffles with fried chicken. They tell her the dish is great. Finally they taste Harry’s “brookies” brownie/cookies. They love how gooey they are. Now Nigella and Matt need to decide on the winner. And the winner is Harry. Harry get’s to cook off against a top chef and has a chance to win an immunity pin.

Harry arrives in his chef’s whites at Masterchef headquarters. Shannon Bennett and Nigella are there with the judges. The guest chef today is named Lachlan.

He starts planning his pavlova. He describes it to Shannon, but he isn’t impressed, he suggests how he would plate it at vue de monde. Harry doesn’t “see” it and goes with his original plan. Now it’s Lachlan’s turn to cook, he has 60 minutes. He decides to make an ice-cream pudding.

Shannon reminds Harry that the presentation of his dish has to be top notch to compete with the chef’s dish. Lachlan has started his anglaise and adds some chopped almonds to it. Harry has piped his meringue and has it cooking in the oven. He takes them out of the oven and the meringues are very fragile, he won’t be able to plate the dish as he had hoped. He doesn’t have time to make a new batch. Shannon reminds Harry of the way they plate up at Vue de Monde and Harry decides to listen to Shannon this time. Lachlan is going to temper his chocolate. Harry gets on to making his ganache. There’s 15 minutes to go. Lachlan finally realises his chocolate is not setting as he had spread it over the bench on top of a hot oven. He removes it and places it somewhere else. Both start plating up, Shannon is guiding Harry but he is not really listening again. Time is up.

It’s time for the judges to taste Harry’s dish, Christmas pavlova. George says it looks amazing. Nigella wonders if the sweet is going to be balanced with the tart flavours. Nigella likes the flavours. Matt likes the cherry on it. Gary says he wants more cream to balance the overall sweetness. George says the dish is really sweet.

Next up is Lachlan’s dish, Australian Summer Christmas pudding. Gary says it looks spectacular. The judges taste the dish. Matt says he thinks its a fun idea and he likes the crunch of the nuts. Gary likes it and says it’s sophisticated. Nigella and Gary both commented they would have like more brandy in the dish.

First up is Harry.

Next up is Lachlan.