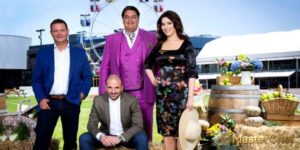 Tonight’s Masterchef Team Challenge is at the Melbourne Showgrounds. It is nigella week, so the dishes must feature jam. There will be 1000 – 2000 guests and the contestants will be split into three teams of six, each cooking three dishes. The winner will be decided by the guests, the two teams who make the most money will be safe.

The yellow team is going to make a rocky road popcorn, corn on the cob and a raspberry jam blondie.

The blue team is going to make a frittata, cupcakes with raspberry jam and refrigerator cake.

The red team is going to make cold chicken salad and scones with jam and cream and “brookies” a cross between a brownie and a cookie.

Gary visited the yellow team’s bench and questions their decision of corn on the cob as it wont be able to stay warm. Heather listens and changes her mind, she decides to change it to a potato salad. Gary and Nigella also question the red team about their choice in “brookies” but Harry is confident with his decision. The teams are all producing food in such huge batches and it is quite daunting for them. There’s an hour before service starts.

The red team is struggling a little, it has taken them a whole hour to produce one batch of 120 “brookies” and they need to  feed a thousand people. Gary notices and tells them they are in trouble. Cecila suggests making just normal choc chip cookies as they will prepare and cook a lot faster. Harry agrees. The blue team is working on their frittata and almost put the raw potato slices on top but Nigella questions whether the potato will cook on time and if then the eggs will be overcooked. The blue team agrees with her and decides to leave the potatoes off and just deep fries them instead to serve with the frittata. The red team is having some trouble with their calculations. They work out that they need 37 kilos of cabbage for their salad.

The yellow team is struggling to make their white chocolate blondies. They finally get their mix ready and into the oven. The stalls are about to open and the food needs to be ready to go in the van to get to the fete. The yellow team has put hot jam trays on cold glass shelves in the freezer to cool down when suddenly one of the glass shelves breaks and they have to discard all the jam. Luckily they have two more trays of jam in the blast freezer.

The teams start loading all of their foods in the vans to get it to the fete. The teams arrive and set their prices. George announces that service time has started. The teams start serving the people. The yellow team are still waiting on their blondies to be cooked, the customers are waiting also. The red team’s chicken salad has sold out super fast. Harry heads back to the kitchen to make some more.

The judges get to taste the foods now. George, Nigella, Matt and Gary taste the blue team’s cupcake and love it. Then they taste the hedgehog slice. They taste the frittata and say something has gone really wrong with it. They do like the fried chips on the side though.

The yellow team’s blondies finally arrive at the fete stall.

Now the judges taste the yellow team’s food. Firstly they taste the blondies and they all love it. Next they taste the popcorn rocky road. Matt says yum! The judges now taste the potato salad, they comment that the look of it isn’t good but the flavour is ok.

There’s only 15 minutes remaining and all teams reduce their prices to sell out all of their food. Time is up!

It’s time to find out which two teams are safe today and which team will be going into an elimination. Gary also mentions that all the money raised today will be donated to the Royal Children’s Hospital, and overall they raised around $18,000 dollars.

The winning team with a total of $6026 is the yellow team.

The losers tonight are the blue team, they are going into elimination tomorrow night