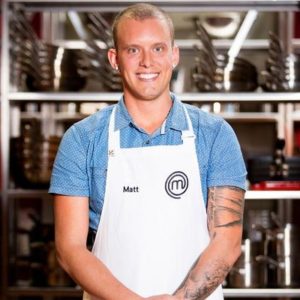 Tonight on Masterchef Australia the blue team from yesterday’s challenge will compete in the Masterchef elimination. The contestants competing in tonight’s challenge are Matt, Charlie, Con, Mimi, Brett and Elise.

The first part of today’s elimination challenge is they have to name all 30 cakes that are on the display. If the contestants name a cake incorrectly then they go straight into round two.

To work out the order of who chooses first they each take a knife from a numbered knife block. Matt draws knife number one so he gets to go first.

Matt is up first. He picks the lamington and tastes it. He is correct. Next up is Brett, he picks the swiss roll and tastes it. He names it correctly. Con is up next and he chooses a carrot cake and is correct. Elise is next. She chooses the blackforest cake. She is correct. Charlie chooses the cheesecake and is correct. Mimi chooses an orange and poppyseed cake. Matt chooses and Victoria sponge. Con chooses an opera cake. Elise chooses and angel cake. Charlie is up next and the choices are getting more difficult. He chooses from two cakes that look like fruit cakes. He cuts it open and realises it’s not a traditional fruit cake. He guesses fruit cake anyway. Nigella tells him it is a simnel cake. Charlie is the first person in round two. Mimi is up next. She picks a Paris brest cake and is correct. Matt is up next. He chooses a chocolate looking cake. He calls it a chocolate truffle cake. Its called a dobos torte. He is now also in round two with Charlie.

The pressure is on, the next person who makes a wrong guess is the final person in round two. Brett choses a cake with asian style markings on it. He cuts it open and is surprised by the filling inside. He guesses that its a moon cake. George tells him it’s correct. Con is up next and he chooses a layered cake. He calls it a continental cake and Nigella tells him it’s vinaterta an icelandic cake. Mimi, Brett and Elise are all safe.

In round two Con, Matt and Brett are going to compete to cook the best cake, any cake they like. Nigella tells them to cook a cake that they know how to get absolutely right, a cake they are passionate about. They have 90 minutes and full access to the pantry.

Con is making a simple pound cake. He is making a strawberry and thyme sauce and a lemon creme fresh filling.

Matt is making a simple carrot cake. He gets his ingredients together and puts it in the oven.

Charlie is making a chocolate and raspberry cake. Nigella asks Charlie why he hasn’t used two tins as it will take longer to cook in one large tin. He’s feeling pressed for time so he puts the tin in the oven anyways.

Con turns his oven up to 200 degrees and Nigella tells him that a pound cake has to be cooked at a low even temperature, so what is he going to cook instead. Poor Con looks panicked. He decides to go against Nigella’s advice and sticks with cooking his pound cake at 200 degrees.

Con’s cake has cooked and he covers it in syrup as it looks a little dense.

Charlie over whips a batch of cream so he quickly whips up another lot.

Time is up and all three guys have completed a cake.

It’s time for the judges to taste the cakes. First up is Matt with his carrot cake. Nigella says his cake looks just like a great home made cake. Gary says it is so utterly delicious, he doesn’t want to stop eating it. Nigella says it has texture and balance and tangyness. Matt says it tastes great and looks great and it’s almost unbeatable.

Finally it’s Charlie’s turn. Matt likes the jam, the ganache and the hazelnuts. Gary says the cake is dry and dense and he doesn’t really want to eat it. Nigella says it’s not a failure as a cake.

It’s going to be close call between Con and Charlie as the judges have decided that Matt is safe. Nigella says Matt did exceptionally well. It was nice to look at and great to eat. Con has been eliminated from Masterchef Australia tonight.