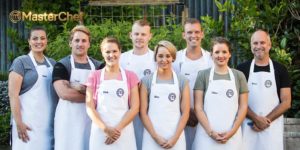 The teams are each given a mentor, a guest chef from the corner of the nation they are cooking from. The contestants have 2 hours to prepare a main and a dessert for 20 diners per team. The top two teams are safe but the bottom two teams will be going into an elimination.

Trent and Elise are going to cook a marron bisque and Elise is cooking a dessert to represent mining with a chocolate soil. Matt and Mimi are making a ginger cake with some monkey bananas and a ginger sorbet and a barramundi dish. Brett and Harry are cooking a pork fillet. Elena and Chloe are cooking lamb with a celeriac puree and for dessert a goats cheese mousse with figs.

Trent gets started on his marron, he’s a bit nervous as he hasn’t cooked it before. Matt is filleting his barramundi and is concerned that it is going to be time consuming. Gary questions Brett on his use of pork fillet as Brett plans on cooking it in a sous vide machine. Gary warns him it could end up tasting like cardboard. Matt is still filleting his fish and it is taking him a while. Mimi gets started on her yoghurt sorbet and her ginger cakes. Trent is cooking his marron tails in the sous vide machine. Elena is making her celeriac puree when she realises she doesn’t have a sauce for her dish. She decides to quickly cook a jus. Chloe is working on her goats cheese mousse. Brett gets his polenta into a pot. He hopes he is cooking enough to serve all of the guests. The diners arrive at the Masterchef kitchen and contestants realise they are all running out of time. Matt is frantically preparing the accompaniments for his dish, some fried taro and grilled pineapple. He still needs to steam his fish. He asks Mimi to help him cook the pineapple and taro so that he can get started on the fish. Brett gets his pork out of the sous vide machine and then fires it off in some butter. There’s 2 minutes before service time begins. The teams begin plating up for service. Service time begins.

Trent and Elise send their marron bisque out to the judges. The judges are impressed with how it looks. They taste the dish. They love it an eat it all. Gary says the marron is perfectly cooked. Matt says he loves it and the ginger bisque is great, they’ve done an amazing job. Brett and Harry send out their pork loin dish. The judges think it looks lovely. George says the flavours are very true to themselves. Gary says the pork is cooked absolutely beautifully but the polenta spoils the dish for him. Elena and Chloe send out their lamb dish. Gary likes the celeriac puree. George says it tastes better than it looks, the sauce is a let down as it needs to be reduced more. Matt says the lamb is a little bland. Mimi and Matt send out their barramundi dish. The judges are impressed with how it looks. Gary says his fish is perfectly cooked. They taste the dish. George says this dish represents the north perfectly and he would love some more of that curry sauce.

It’s dessert time. Harry gets started on his cold custard with a pecan crumble. Mimi gets her sorbet into the freezer and makes her ginger syrup to put on her cakes. Elise is making her chocolate soil with panna cotta. Chloe is a little worried about her fig and red wine sauce. Dessert service time starts now. Elise and Trent’s chocolate soil dish goes out first. They realise they don’t have enough panna cotta for all of the plates. Elise still has some panna cotta mixture so she is going to put some mix quickly into the blast chiller. Brett and Harry send their custard dish out to the judges. George says it looks fantastic. They taste the dish. Gary loves the biscuit and the texture of the custard. Matt liked that there was lots of fruit. Chloe and Elena send out their goats cheese mousse. The judges taste the dish. George says the dish is a little clumsy and the syrup is a little too watery. Mim and Matt send out their ginger syrup cakes. The judges comment that its a big dessert and there’s a lot of cake. They taste the dish. George says the yoghurt sorbet and banana are great but the cake is dry and he doesn’t like it. Gary says the cake could have worked if the syrup was thicker and stickier. Elise and Trent get their remaining panna cotta’s out of the blast chiller. Their chocolate soil dish goes out to the judges. The judges taste the dish. Gary likes all the different textures in the dish and Matt likes the addition of thyme to the dish. Service time is over. 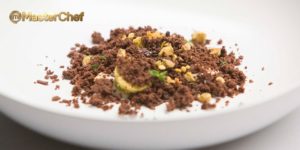 It’s time to find out which two teams have succeeded and which teams will be going into an elimination. George says there is a big prize for the winning team today. The winning team of the challenge today is the yellow team Trent and Elise. Matt says they will not find out what their special prize is until tomorrow. The second team that is safe today is the blue team, Brett and Harry.

The two bottom teams are Matt and Mimi and Elena and Chloe. They will be competing in tomorrow’s elimination.