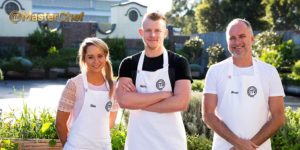 Brett has venison, bay leaves, elderflower cordial and bay leaves to cook with.

Harry and Elise have quandong, mastic, cauliflower, elderflower cordial, venison and bay leaves to cook with.

Both Harry and Elise choose to cook a sweet dish tonight. Elise is making a tart with mastic ice-cream and Harry is making a pavlova.

Elise gets started on her mastic ice-cream. She is not sure how much mastic to use but George tells her the flavour will intensify as the ice-cream mix cools. Harry is making a quandong and elderflower cordial jam. Elise puts her tart case into the oven. Then she gets started on a quandong jam.

Brett’s time has started. He is making a cauliflower puree, pickled cauliflower and roasted cauliflower. Harry takes his pavlovas out of the oven and is not happy with them. He decides to use a custard using the mastic. Brett coats his venison with black pepper and then flash fries it in a pan. He then makes a sauce with the juices from the pan. Elise takes her tart out of the oven and then takes her ice-cream mix out of the churner and puts it into the oven. She is concerned that the mastic flavour is a little too strong. Harry decides to make an eton mess with his failed meringues. The contestants plate up their dishes. Time is up!

The judges now taste the dishes. Brett is up first. He has made cauliflower puree with pepper crusted venison. The judges say it is absolutely delicious. Matt says the venison is lovely and tender. Shannon Bennett says Brett has come a long way with his cooking. Gary says it’s the dish to beat. Harry is up next. He has made an eton mess. George says the meringue is not right but the quandong jam is delicious. Finally it’s Elise’s turn. She has made a quandong and creme patissiere tart with mastic ice-cream. Gary says it is beautiful. George says the flavour combinations are really interesting. Shannon thinks the textures of the dish are great. Now it is time to find out who is going through to the second round. Brett has won the opportunity to cook for the immunity pin.

Round two. The guest chef tonight is Shannon Bennett himself. There is no time advantage today, 60 minutes cooking time, open pantry, open garden and Gary will be running the kitchen today. George and Matt will be the judges doing the blind tasting today.

Brett decides to cook a rack of lamb with a smoked parsnip puree with some asparagus. Shannon is going to braise some lamb shoulder and roast some lamb loin. Brett gets started on a jus but as he is cutting up the meat bones he cuts his finger. He is worried about this set back in time. He finishes his sauce and then grates the parsnip for his parsnip puree. Brett fries up some shallots and then knocks them off the bench. He is really flustered today. He also needs to have his hand re-dressed by the nurse. Brett frenches his lamb rack. Shannon fries off his lamb loin and then puts it into the oven. Shannon runs outside to find some sorrel. His timer beeps and he runs back inside to take his lamb out of the oven. Brett gets his lamb into the frypan. Shannon cooks up some shallots and brussel sprouts to add to his dish. Brett is making his smoked parsnip puree. Shannon has his dish under control so he goes around to give Brett some help and advice. Shannon takes the lid off his pressure cooker but is disappointed that his meat is not cooked how he would have hoped. He digs through the pot and finds some smaller pieces of meat that are cooked and he is happy. There’s 5 minutes to go and they both rush to complete their dishes. It’s time to plate them up. Time is up!

It’s time for the judges to taste the dishes. The first dish to go in to the judges belongs to Brett, it’s his lamb with smoked parsnip puree and enoki mushrooms. The judges like the presentation. They taste the dish. Matt says its comfortable and delicious and it’s a great dish. George says the lamb is cooked really well and the parsnip puree is flawless. The next dish belongs to Shannon, it’s lamb with onions mustard and fresh herbs. The judges taste the dish. Matt says it has classic French flavours, he says the lamb is cooked perfectly. George says the lamb is exceptionally cooked and the mustard foam is lovely. They are a little unsure about the braised lamb. They score the dishes and go out to the contestants. 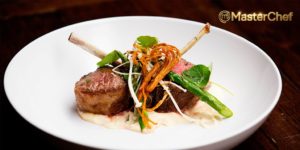