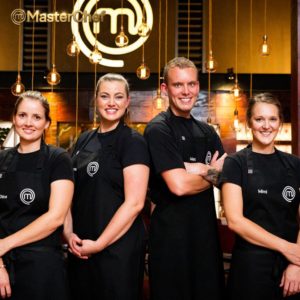 Tonight on Masterchef Australia, Matt, Mimi, Elena and Chloe will be competing in an elimination. Tonight’s challenge is a time auction where the contestants get to bid for foods they want to cook with but have to give up amounts of time to do so. The contestants begin with 120 minutes of time. There are three categories of foods and each category has four choice. One of the categories is proteins with the choice of eggs, duck, fish and beef. George tells them that whatever they win they must use and have no access to the pantry.

The first auction is for the beef. Mimi and Elena both bid on it. Mimi wins the beef for 25 minutes. Next up is Duck. Elena and Matt both bid on the duck. Matt wins the duck for 35 minutes. Eggs are up next. Elena and Chloe both bid for the eggs. Chloe wins it for 15 minutes. Elena gets the red mullet for free.

Chloe’s 100 minutes starts. She decides to make a mousse and meringue. The judges question whether her mousse will work without a setting agent. Mimi is making an eye fillet with roasted beetroot. Matt is making duck two different ways, crispy skinner breast and braised duck leg. Elena is filleting her red mullet, it is taking her a lot longer than she had hoped. Matt Preston is not impressed with the sauce Matt has made, he tells him to have a backup plan. Elena is making a sauce to go with her fish. Chloe gets started on her orange curd. She is pushed for time so she chooses to cook her curd in the microwave. It is not thickening up but she puts it in the fridge anyways. Mimi is making a charred beetroot butter with some beetroot leaves. Matt is still wondering how to fix his sauce, he decides to add some burnt butter, sugar and vinegar to his sauce. He starts panfrying his duck and then puts it into the oven. There’s 15 minutes remaining. Chloe is making a wafer to add to her dish. The judges ask to see her mousse. They comment that it is still really soft. She decides to put it in the blast chiller. Elena is making a salad for her dish. Mimi has all of her elements ready, all she has to do is plate up. Elena starts cooking her fish. Chloe is not happy with her curd, it is still runny and sloppy. They all frantically start plating up. Chloe’s mousse has frozen and she could hardly spoon it out. Time is up.

Who will be eliminated tonight?

It’s time for the judges to taste the dishes. Matt is up first. He brings his dish into the judges, it is duck two ways with a jus. The judges are impressed with how the dish looks but Matt is worried about how the sauce is going to taste. The judges taste the dish. George says the duck is cooked beautifully and its full of flavour. They are unsure about the sauce still. Matt says the sauce could send him home. Next up is Elena. She has made a mullet and nightshade sauce. Matt says oh wow! George says oh wow! They all love the dish. Gary says he cannot fault the dish at all. Matt says it is clever cooking. Mimi is up next. She has made an eye fillet with roasted beetroot and a sauce. The judges taste her dish. They love the crispy beetroot leave and the beef. Finally it’s Chloe’s turn. She is worried about her mousse. She has made a honey mousse with a orange curd and butter wafer. Matt asks her is it a mousse, is it an ice-cream or is it a parfait? The judges taste the dish. Gary says what a shame, the mousse is an absolute disaster. George says it’s just not good enough. 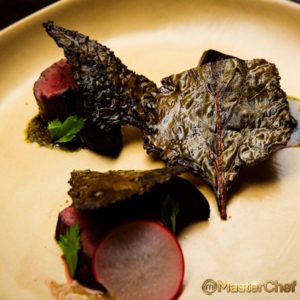 Now it’s time to find out who will be eliminated tonight. The dish of the day belongs to Elena. Gary says it is one of the best dishes they have eaten all year.

Chloe has been eliminated from Masterchef tonight.

Next week is California week! Trent and Elise will be flying business class with Qantas as the prize for winning yesterday’s team challenge.