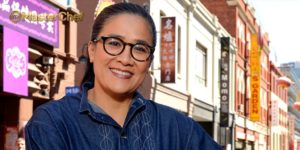 It is Masterchef Team Challenge night with Kylie Kwong. The teams must cook Chinese food in Melbourne’s China Town.

The team’s arrive in China Town. They are greeted by the judges. Gary explains that in honour of Chinese New Year the teams will be cooking a selection of Chinese foods. Kylie Kwong arrives. She will help mentor the contestants today.

George reveals a bag of fortune cookies to help the contestants choose their teams. In each cookie is a yellow lucky paper or a red lucky paper, if it has a C on it then you’re captain.

The captains are Chloe for the yellow team and Elise is the captain of the red team. They must make a minimum of two dishes, one must be $7  and all the other must be $5. They need to be able to serve 500 people. All the money raised in today’s challenge will be going to the Smith Family charity organisation.

The yellow team are deciding on their dishes. A pork belly skewer with plum jam and a hot beef noodle stir fry.

The red team is deciding on their dishes. A pork noodle salad, deep fried wontons, and a sweet dish a fruit sago.

The teams start preparing their dishes. Kylie visits the teams to ask what they are making. She questions the yellow team on whether cooking a hot noodle dish is the right move when they will be having hundreds and hundreds of people lining up for food. Chloe thinks that maybe it should be served cold but Harry doesn’t agree. They finally negotiate to serve the dish cold.

The red team are busy wrapping the pork and prawn wonton. They are hoping to wrap 600 wontons.

Nicolette in the red team is feeling a little overwhelmed as she is the only person working on the dessert in her team.

The yellow team opens their pressure cookers and taste the pork belly. They’re happy with it so they begin skewering it.

Gary questions the red team over how many portions of pork they have prepared. Brett and Trent check the portions and work out that they only have about half of the quantity that they need. They quickly cut up some more pork.

There’s 10 minutes remaining and they hurry to get their dishes prepared. Nicolette in the red team begins to plate up her dessert dish.

There’s 5 minutes remaining and both teams start plating up their dishes ready for service.

Both teams are swamped by customers. The food is flying out and the teams are worried that they won’t be able to keep up with demand.

It’s time for the judges to taste the red team’s food. They taste the wontons first. George loves the chilli sauce but Kylie says the wontons are a little dry. Next they try the xo pork noodle salad. Matt says it’s a winner, Kylie says it’s very flavoursome and the pork is tender. Finally they taste the coconut sago pudding. Kylie says it’s light, fresh and not too sweet. Gary loves the fresh fruit in it. They judges think adding a dessert to the menu was a clever move.

Now the judges taste the yellow team’s dishes. They taste the beef noodle salad first. Matt says the beef is delicious. Gary says where is the dressing in the salad. Next they taste the pork belly and plum sauce skewers. Kylie says it is really delicious and she loves the sauce. George says it’s great street food. Gary says it’s a great dish.

It doesn’t really matter though what the judges think of the food as the team that makes the most money today wins.

All of a sudden the yellow team runs out of customers while the red team is still busy with customers. Harry suggests that they put another item on the menu, he suggests that the do whole king prawns on a skewer. People start queuing up for the prawns.

There’s 10 minutes remaining. The teams start taking their food out to the people to try and make some last minute sales.

It’s time to find out which team has made the most money tonight. The teams together raised over $6000. The winner tonight was the red team. The yellow team will be going into the elimination challenge.