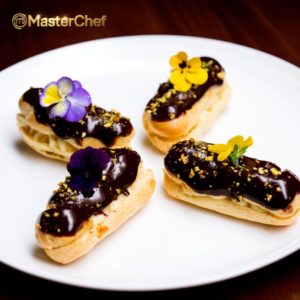 Tonight on Masterchef Australia three contestants compete for an immunity pin. Chloe, Brett and Trent all desperately want the chance to win the immunity pin. They arrive at Masterchef Headquarters and Chloe says she’d love to win another immunity pin as she already has one. Guest chef Shannon Bennett is also here to help out the contestants. Today’s challenge is in two rounds, win the first round and they go through to compete again a special guest chef.

Round one begins. The contestants see a tower of eclairs. Their challenge today is to come up with a creative and different eclair. They have 60 minutes and an open pantry.

Brett is going to make a chocolate eclair with pistachios and a creme patissiere.

Chloe is making a chocolate eclair with a toasted pecan praline.

Trent is making a white chocolate eclair with macadamias, raspberries and creme patissiere.

Trent is worried that his eclairs might need more time in the oven and he still needs to cool them down before he can fill them.

Brett starts assembling his eclairs as does Chloe. Trent’s choux pastries are still in the oven. He’s running out of time. He finally gets his pastries out of the oven and into the blast chiller.

There’s three minutes to go and Brett has plated up his eclairs. He thinks it needs something else so he runs out to the garden and picks some flowers. Trent has filled his pastries and now just needs to decorate them. It’s down to the last ten seconds and the contestants are still decorating their eclairs. Time is up.

It’s time for the judges to taste the eclairs. Brett is up first. He has made jaffa eclairs with a pistachio crumb on top. The judges taste it. Matt says he loves the flavour combination and the glossy chocolate on top. Gary says they look great and the flavours are good but there is no crunch, the outside of the pastry should have been crispier.

Next up is Chloe. She has made creme cheese and dulce de leche eclairs with a toasted pecan praline. The judges taste it. George loves the creme cheese filling. Matt and Gary say the choux pastry is incredible. Shannon said it’s up to a French standard. Matt says the icing is a bit runny so they’re not perfect.

Finally it’s Trent’s turn. He has made a white chocolate eclair with fresh raspberries. The judges taste it. Matt says great work Trent. George says he’s done really well. Gary says he likes the flavours and the choux pastry is almost spot on but it’s a bit one dimensional. Shannon says it is missing a hint of lemon.

The guest chef tonight from Belles hot chicken, Morgan McGlone is introduced. Chloe now gets choose the core ingredient, the choices are between tea and coffee. She chooses coffee. The judges leave and it’s time for Chloe to begin her dish, she has 75 minutes. She’s going to make a dessert, a semifreddo. She is making a coffee bombe, inspired by a bombe Alaska.

Morgan is going to make a savoury dish today. He is making a coffee crusted quail and a red eye sauce.

They have 45 minutes to go. Chloe is making a sauce for her dessert and she has added some coffee liquor.

Morgan is concerned he has added a little too much coffee to the sauce he is making. He starts to debone his quail and leaves it out to room temperature. He adds some more flavours to his sauce and keeps basting his cauliflower in hot butter.

Shannon walks over to Chloe’s bench and tastes her Swiss meringue. He says it’s not right at all and tells her to remake it.

Morgan cooks his quail on the grill and continues to baste his cauliflower, he hopes it is cooked in time.

There’s two minutes left and they both start plating up. Chloe pipes her meringue and she can see that it’s not quite right.

The first dish taken into the judges is Morgan’s fried quail with butter poached cauliflower and red eye sauce. They taste the dish. George says it is something he has never tasted before and the cauliflower is yum. Gary says it’s wonderful and really yum. Matt thinks the dish is quite out of whack, the sauce has too big flavours for mild quail and cauliflower.

Next Chloe’s dish is taken in to the judges. It’s a coffee bombe with chocolate sauce and brandy to flambe. The judges taste the dish. Gary says the dish is definitely about the coffee. George says its a good idea but there is a problem with the meringue. Matt says the chocolate coffee sauce is great. The judges score the dishes.

The judges reveal that they have guessed which contestant cooked what.