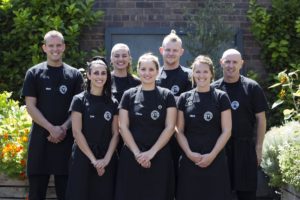 The judges ask her. After an emotional decision, she says she will use it. Chloe is safe from Masterchef elimination tonight.

For this elimination, the contestants have to pick an ingredient and a cuisine from a lucky dip bag. Here is what they picked:

Miles is very happy with his pick, his son is a Japanese chef and he has spent time in Japan. He is making a tempura salmon. After identifying pumpkin as a fruit, Zoe is making a pumpkin pie. Elena is making a spanish pork and rice with the pork cooked three ways. Mimi took a while to figure out a dish, thai and lamb don’t usually go together. The judges help her and she goes for a thai lamb salad.

There is 45 minutes to go, Zoe hasn’t made the pastry for her pie. The judges talk to her and ask one of the contestants in the gantry how long it takes to make a pastry, 60 minutes was the reply. She is in trouble.

Miles is struggling, he is nervous. He is making mistakes preparing his salmon.

Zoe is quickly getting her pastry cooked then in the blast chiller.

Harry is making a curry, he’s got it on the stove and cooking. Who will be eliminated from Masterchef tonight? Mimi’s thai lamb salad looks good but the contestants on the balcony think the dish is missing a crunchy element. Miles is worried as his cook did not quite go to plan, he was definitely feeling the pressure today.

It’s time for the judges to taste the dishes. Harry is first up. He has made a kerala prawn curry. He had the cards shellfish and Indian. The judges says the dish looks great. They are excited about it. The taste the dish. Gary says the dish is lovely and delicious. George says it is a sophisticated all round dish. Matt says it ticks all the boxes.

Next up is Mimi. She had the cards lamb and Thai. She’s made a Thai lamb salad. The judges say they are concerned about the dish. They taste the dish. Gary says it’s clean and fresh and he likes the herbs. Matt says the lamb is well cooked. Gary says the crispy element is missing.

Matt is up next. He has made braised beef shin with a smoked eggplant yoghurt. He had beef and Lebanese as his cards. The judges taste the dish. Gary says it has some great flavours. Matt loves the eggplant yoghurt. George says Matt is a true cook.

Next up is Zoe. She had the cards fruit and American. Zoe made a pumpkin tart with a maple ice-cream and bacon. The judges taste the dish. They say the pastry is clumsy. Gary likes the praline crumble. Matt says it doesn’t have the warm custardy pumpkin pie texture.

Elena is up next. She has made Spanish rice with pork. The judges like the look of the dish. They taste the dish. Gary says it’s delicious and beautiful and the pork is amazing and tender. George says it is an unforgettable dish. Matt says it is one of the best dishes they have eaten on Masterchef. George says this is the dish of someone who could win Masterchef.

Miles is the last contestant up. He had the cards fish and Japanese. He made salmon two ways with Miso soup and tempura. Matt asks if there is fish in the soup or the tempura and Miles replies no. Matt asks whether he should have just concentrated on the fish. The judges taste the dish. George likes the tempura and the dipping sauce. Gary says the hero of the dish is the tempura. Matt says it is a tasty dish but the fish could have been cured longer.

Harry, Matt and Elena are all safe tonight. Gary says Elena had cooked one of the best dishes they have ever tasted on Masterchef.

It’s now between Mimi, Zoe and Miles. Which favourite will be eliminated tonight? Miles has been eliminated from Masterchef Australia tonight.