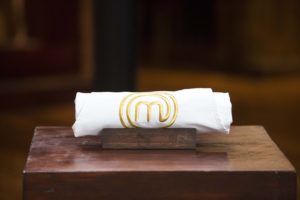 It is power apron week on MasterChef. What is the power apron? It will give one contestant a game changing advantage. Luke Nguyen has put together a Mystery Box with one killer ingredient. The judges tell us that they won’t reveal what the power is until the contestant wins it.

Here are the ingredients for the mystery box.

Will any of the contestants use the crickets?

In this round, the contestants have to cook a dish using these ingredients and only three dishes get tasted. Chloe is making a cricket parfait, Heather isn’t sure what she’s going to make, she decides to use the goat and smoke it. Matt is making a citrus cured goat salad. Who will win the power apron tonight?

Elise is making a caramel cricket parfait. Heather pan fries her goat and puts it into the oven. She is plating up her dish and hoping that her dish gets tasted today. Harry starts to plate up his dish on top of the beetle leaves. There’s three minutes to go. Which dish will they taste tonight? Time is up! 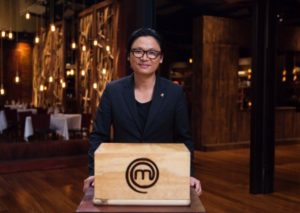 The first dish the judges decide to taste belongs to Matt. He has made a citrus cured goat salad. The judges taste the dish. Luke says he likes the presentation. He says the way he cooked the goat was cool and that he used all the things from the box. Gary says the use of the goat was so different to what anyone else was doing. Matt is relieved.

The next dish the judges want to taste belongs to Heather. She has made smoked and barbecued goat with a tamarind glaze. The judges taste the dish. Luke says he’s never cooked beetle leaf like that before. Matt says its a delicious dish and he really likes it.

The final dish they taste tonight belongs to Elise. She has made a cricket caramel parfait with a lime curd and sweet beetle leaf. The judges say it looks fantastic. They taste the dish. George jokes that there is a beetle in his dessert. Gary says he likes it, he likes it a lot. George says he loves how she’s thinking at the moment. Luke says the dish comes together really well.

Who will receive the power apron tonight? Elise has won the power apron. She gets to choose the method of cooking for the next challenge. She can choose between steaming and frying. The ovens will not be in use in this challenge.

It’s time to tell the other contestants which cooking method she has chosen. Elise has chosen fried.

The challenge is to cook something where frying is the only method of cooking. They can use the cooktop but only if they are frying. They will taste everyone’s dish today and they are only looking for the best dish today. The winner of the best dish wins the power apron. Cook one of the least impressive dishes and they will find themselves in the bottom three and into an elimination. Elise has the power apron so she has 90 minutes to cook her dish while the other contestants have only 60 minutes to cook their dishes.

Elise is making a fried quail with a jus. Gary comes along to her bench and can see she is making a jus, which means she is boiling not frying so she cannot make the sauce. Elise replies that the challenge is really hard. She feels like she has wasted her 30 minute head start. It’s time now for the other contestants to start cooking.

Anastasia is cooking fried prawns and scallops with a fried fennel pesto. Karmen is making a laksa inspired dish. Chloe is making duck breast with a peanut chilli sambal. Elena is making a pork and prawn filled egg net. Zoe is making a whole deep fried baby snapper with a mango salad. She has never deep fried a whole fish before. Harry is making Korean spicy fried chicken. He lived in Korea for a short time. Brett is making crumbed fish and chips.

Zoe puts her snapper into the deep fryer and is worried that she might overcook her fish. Elena is having a little trouble making her egg nets. Luke gives her a tip to use a fork for the batter instead of a squeezy bottle and he also comments that her batter is a little too thick. Zoe takes her snapper out of the deep fryer as it looks cooked. She leaves it on the bench for a few minutes and realises that it has gone soft and that she cannot serve it to the judges like that. She is not sure what she is going to do. Anastasia is adding fried brussel sprouts to her dish. Zoe runs back into the pantry and puts another snapper into the deep fryer. She splashes hot oil all over her hand and is in a lot of pain. She is wondering how she is going to get her dish finished. Elena abandons the idea of an egg net and decides to make just some omelettes instead. It’s time for the contestants to start plating up their dishes. Time is up!

It’s time to find out who has made the best dish today and who will be going into the bottom three.

The three top dishes belong to Anastasia, Chloe and Harry. The dish of the day and the winner of the power apron is Anastasia.

The three worst dishes today belong to Elena, Zoe and Elise. They will be going into tomorrow’s pressure test and one of them will be going home.