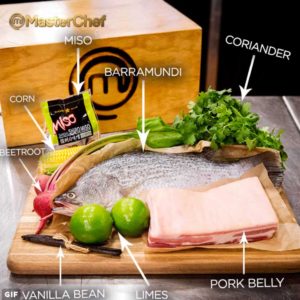 First off, Matt tells the contestants that they need to keep their scraps tonight. George says the winner from the mystery box tonight will go straight through to the immunity challenge. The contestants have 60 minutes to cook a dish that contains at least one of the ingredients in the box.

Brett is hoping that his dish is tasted today as he hasn’t been tasted before in a mystery box challenge. He is cooking a crispy skin barramundi. Matt is cooking some pork belly in a steamer but he’s worried if it’s not going to be ready in time. Anastasia is also cooking the pork belly in a pressure cooker. Chloe is making a smoked nougat with a beetroot caramel. Zoe is making a cake with a smoked vanilla ice-cream. She’s hoping her cake will cook in time so she bumps the oven up to 220 degrees.

Brett cooks his fish with 15 minutes remaining. Trent has made some pork and corn dumplings. He checks on them in the steamer but is not happy with them. He decides to make them again. Matt cooks his pork belly in the deep fryer. Zoe turns the oven up again to 250, it’s not cooked in the centre still. George tastes her ice-cream and tells her her cake better cooks because that ice-cream is delicious. There’s three minutes remaining. Everyone starts to frantically plate up. Time is up.

The first dish to be tasted belongs to Brett. He has made a crispy barramundi with a corn puree and a pickled beetroot. Matt says its a lovely dish and is delicious. George says the fish is cooked beautifully. Gary says the dish works perfectly. Next is Anastasia. She has made vanilla sticky pork with beetroot. George says this is a cracking dish, but it just needs some salt. Matt says the dish needs half an hour longer in the pressure cooker. Gary says she’s done a great job using the ingredients she had. Next up is Trent. He has made pork and corn dumplings with a miso caramel broth. Gary says he loves the presentation of the dish. Matt bangs the table with his spoon enthusiastically as he loves the dish. He says the caramel and the dumplings go so well together, it’s a really great dish, he loves it. Gary thinks it’s absolutely delicious. Zoe is up next. She’s made a sponge cake with a miso glaze and a smoked vanilla ice-cream. George says it is one of the best ice-creams he has tasted but he’s not a fan of the cake. Matt says the sponge is too heavy but the ice-cream is cracking. The last dish they will taste belongs to Chloe. It’s a smoked lime and vanilla nougat with a lime crumb and a beetroot caramel. Again Matt bangs his spoon on the table and so do the other two judges, they say the dish is delicious. Matt says all of the elements were perfect. Gary says the dish was utterly delicious.

Chloe wins the mystery box challenge today and she has won the advantage. She is straight through to the immunity challenge and she does not need to cook again today.

The rest of the contestants are competing in an invention test. No pantry, no core ingredient, today they are cooking with their scraps, whatever is left in their mystery box. Today they get extra credit for cooking creatively with their scraps. They have 60 minutes. The top three dishes will join Chloe in the immunity pin challenge and the bottom three go into an elimination challenge tomorrow.

Harry decides to cook with his fish again, he has half a fish left. Heather is making a Barra mornay. Mimi is making a coriander ice-cream with a lime syrup cake. Brett is making a roasted pork sandwich with a flat bread. Matt is making a fish san choi bao. Karmen is also cooking the barramundi. Charlie is making a miso ice-cream with a caramel. Brett is having trouble making his mayonnaise for his pork sandwich. He is starting to panic that he will have no sauce. Theresa is going to make a dessert. The judges question what she is making and she changes her mind, she is making a corn custard tart. Charlie is really worried that his ice-cream is not going to be ready on time. He pours the mix into some dome moulds and into the blast chiller.

The judges say they are really excited about tasting the dishes today.

Heather is cold smoking her barramundi and is making a butter pastry. Brett is finding he is pushed for time to cook his flat bread. Elise is in trouble. She was planning on making a microwave sponge but her mix is too thick and it won’t charge in the gas gun. She adds milk to the mix and it works finally. Charlie’s ice-cream has not set but he decides to serve it anyways. All of the contestants are plating up. Time is up.

The first person up is Matt. He has made a barramundi san choi bao. Gary says the dish is just wonderful. Matt says he has set the bar really high and it is a cracking dish. Next up is Charlie. He has made a miso ice-cream with a sweet corn crumb. His caramel sauce has seized and he is feeling quite embarrassed. The judges taste his dish. George says the plating was wrong. Gary says the ice-cream had a funky flavour. Matt says the dish has too many flaws. Next up is Heather. She has made a barra mornay. Matt says he loves it, he says it’s a clever dish. Brett is up next. Its roasted pork in a coriander flatbread. George says this dish needs sauce. Then a few more contestants get their dishes tasted and get great reviews. Next up is Karmen. Gary says its the most complete dish she’s cooked for them. George loves it. Theresa is up next. She has made a sweetcorn milk tart with miso ice-cream. The judges really don’t like it and say she’ll definitely be in the bottom three. Mimi is up next. She has made a coriander ice-cream with a lime syrup cake. The judges love it. Gary says its delicious and clever. George agrees that it’s delicious.

The top three dishes tonight belong to Matt, Karmen and Mimi. These contestants join Chloe in the immunity pin challenge.

The bottom three dishes belong to Theresa, Charlie and Brett. They will be fighting it out in tomorrow’s pressure test and one person will be eliminated.