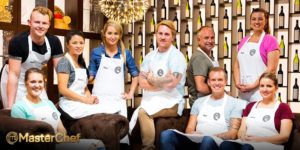 Matt decides he is going to go with the theme of American bbq. He has no idea what he is going to do with the condensed milk.  Harry is going to make a drunken pork belly. Mimi is going to cook her pork belly three ways, fried, roasted and she’s also going to make some pork floss. Matt has an idea of using the condensed milk to glaze the pork. Elise decides to make a dessert today. She is making a rum and date frozen nougat on the bottom with a pork belly crumble but she is not sure about what she should do with the onion. Brett is making a sticky pork with a date and onion glaze with some dried apple skins. Matt’s condensed milk glaze is not working out so he decides to start again. Matt makes a caramel using sugar this time. Elise is making a poached meringue sphere with an apple centre. There’s 5 minutes remaining and the contestants start plating up their dishes. Elise checks on her onion skins to make an onion ash but it hasn’t worked out. Mimi’s puree looks more like a soup so she adds some dates to it to try to thicken it up. Time is up.

The first dish the judges decide to taste belongs to Mimi. She has cooked pork three ways with pickled apples. Gary loves the dish, he especially loves the crispy pork. He says its a very clever dish and is really yum. Harry’s dish gets tasted first. He has made drunken pork belly. Gary says it’s a clean and tasty dish. He loves it. Matt says it’s a lovely dish and is one of the best he has presented in the competition so far. Finally it’s Brett’s turn. He has made sticky pork with smoked corn puree with apple. Gary says it is a really impressive looking dish. The judges taste the dish and are really enjoying it. Matt loves the smokiness of the corn puree and he loves the fact that Brett is developing his own style in the competition. George says he could win this competition.

The winner of the mystery box challenge today is Brett. Brett now gets the advantage in the invention test. Brett gets to choose the inspiration for today’s invention test dish. The three choices are apricot chicken, earth and cactus/prickly pear. Brett makes his choice and reveals it to the contestants. He has chosen apricot chicken.

Brett is making a tangy apricot sauce with a chicken roulade and a couscous. Matt decides to make an apricot and brandied quail with a couscous. Mimi is struggling with an idea for her dish today. She decides to pressure cook her chicken then then finish it off in the oven. Theresa never grew up on apricot chicken, she decides to brine and sous vide her chicken. Harry is also doing a sous vide apricot chicken with a couscous and a jus. The judges speak to Mimi and ask her what her dish is. She tells them she is not really sure. George says he is worried about her. He tells her to not bother with the pressure cooker but to just seal her chicken off in the pan. They tell her to get her dish organised in her head. Elise is going to keep her chicken simple and just drizzle an apricot jus over the top. She wants to keep her dish sophisticated. Trent is making an apricot chicken curry. Theresa is worried she is not going to get her dish ready on time. She needs to cook her chicken for at least 30 minutes in the sous vide machine.

There’s only 15 minutes remaining now. The judges question if Trent’s curry is going to be fancy enough to compare with the other contestants dishes. Mimi is worried that her cauliflower puree tastes a bit strange but she uses it anyways. Elise starts to plate up her dish. Theresa takes her chicken out of the sous vide machine with 3 minutes to spare and it’s raw. She pan fries it quickly. Time is up. Theresa has put three pieces of chicken on her plate but she is worried as one piece of chicken still looks underdone.

Brett’s dish is the first one to be tasted today. He has made a couscous with an apricot puree and a chicken roulade. The judges taste the dish. George says it is a sophisticated dish, it’s brilliant food. Gary says it looks beautiful and modern. Matt says it’s a super fresh tasting dish. Next up is Trent. He has made a hot and sour apricot chicken curry. Gary says it’s tasty and says it’s a yum mid week dinner. Matt says it could be a bottom three dish. Elena’s dish is not pretty but is yummy according to Gary. Chloe’s dish is called clever by Matt Preston. Matt is up next, he has made a pan seared quail. George says gee Matt you can cook for sure. Matt likes the combination of the cardamon and apricot puree. Mimi is up next. She has made an apricot chicken leg with a cauliflower puree and an apricot sauce. Gary says it’s like a local bistro meal and is not wowed by the flavours. Next up is Elise. She has made a sous vide chicken breast, charred onions and apricots and crispy skin. Gary tastes the dish. He says its a bloody delicious dish, it’s sophisticated and clever cooking. George says she has nailed the concept today. Next up they call Theresa. She has made sous vide chicken with an apricot jus and leeks. Theresa is clearly upset with her dish. Gary says the chicken is undercooked. Matt says the dish has nothing but flaws today. Harry is up next. He has made a sous vide chicken with an apricot jus. The judges love it. George says there is no fault to pick with the dish. Gary says the chicken was cooked beautifully.

Now it’s time to find out who cooked the top dishes and who cooked the worst dishes. The top three dishes belong to Elise, Harry and Brett. They will be competing in the immunity pin challenge.

The worst three dishes belong to Theresa, Mimi and Trent and they will all be competing in an elimination challenge tomorrow.