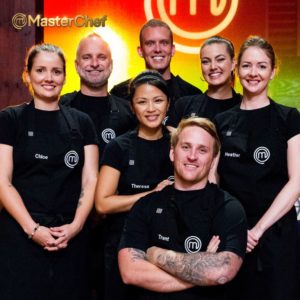 Tonight on Masterchef seven contestants compete in an elimination. They arrive at Masterchef headquarters. They see a prism on a pedestal in the front of the room. The lights go out and a rainbow appears from the rainbow, the rainbow has seven colours. These are the colours the contestants will be using to cook with in this Heston elimination. Each contestant will be using one of the colours from the rainbow. To decide who gets what colour George brings around a knife block.

The contestants have 75 minutes to cook their dish and have an open pantry. The least impressive dish will see them eliminated today.

Matt is stumped with his food colour of blue. There are not many blue items in the pantry. He decides to get inspiration from the blue ocean and chooses to cook with seafood.

Chloe has indigo, she also chooses to take inspiration from the colour. Indigo was her grandmother’s favourite colour so she has chosen to be inspired by her grandmother.

Heather is making lemon dish to represent her colour yellow. She is making a lemon delicious.

Elena is making an orange dish. She is inspired by warmth and sunshine. Her dish is called reef walk, she is making a seafood dish.

George and Heston approach Chloe’s bench. She now says that she is inspired by the dark night sky. The judges are not convinced with her ideas. She is worried this dish might see her eliminated tonight.

Brett has the colour green and he is making a green ants nest. He is making it with some crispy kale and some brussel sprouts.

Matt is making a rock pool to represent the colour blue. He is using scallops, prawns and whiting.

Trent is making a jerk chicken to represent his colour violet.

Heston and George approach Heather’s bench and question her use of coffee dukkah crumb to go with her lemon delicious. George tells her to taste her dish.

Theresa is trying to set her parfaits using liquid nitrogen. She accidentally gets some of the liquid nitrogen into her parfait and it ruins it. She has one more chance to get it right. Theresa is extra careful and puts it into the blast freezer to set.

Matt Preston approaches Matt and likes the concept of his dish but asks where the blue element is. He says the dish needs something blue so that the judges can make some connection with the colour and the theme. Matt runs back to the pantry to find something blue to add to his dish but he doesn’t find anything. He suddenly find some blue mussels from Port Arlington. He heats them up in a wok and he hopes this blue element is enough for the judges to make the connection.

Brett starts plating up his green ant’s nest and is happy with how it looks. Chloe runs to get an indigo plate to represent the night sky but there are no indigo plates. She instead decides to use a white plate and is disappointed as it no longer represents the night sky.

Time is up and all of the contestants are finished. Heather is devastated as her lemon delicious has collapsed, it does not look good.

Elena is up first. She had the colour orange. She has made a prawn, crab and scallop seafood broth. The judges taste the dish. George loves the broth. Heston says the broth reminds him of the sea. He says it’s a really special dish, the best dish he’s had all week. Heston then drinks the remaining broth out of the jug.

Chloe is up next. She had the colour indigo. The is no indigo at all on her plate, George asks her where it is. She explains her inspiration is her grandmother. Gary says a blue or a black plate would have made perfect sense. Matt says he is concerned that she has not met the brief at all today. The taste the dish, they like it but is misses the concept and the whole idea of the challenge. George says the candied fennel is too sweet. Matt says she has missed the brief today.

Trent brings in his violet dish, a jerk chicken with an almond puree. Matt likes the ways the puree works with the jerk chicken.

Matt is up next, he has the colour blue. He says he has made the connection with the ocean and has used blue mussels to represent the blue. Matt Preston says the dish is a little too salty.

Theresa is up next with the colour red. She has made a toadstool with a parfait cap, salted praline and sponge base. The judges are impressed with how it looks. Gary says he loves the dish, he loves how thin the sponge is. Heston says every single thing on the plate serves a purpose and the level of sugar in there is perfect. 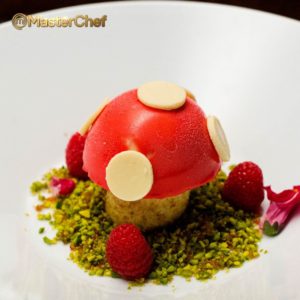 Heather is up next. She had yellow and made a lemon sultana delicious. Matt says it is an iconic recipe. It does look quite unappealing. George says he hopes the dish tastes like lemon as he is confused. The judges taste the dish. Matt likes the actual lemon delicious but the rest of the things on the plate he does not like. Gary says it’s a lemon disaster.

It’s time to find out who will be eliminated tonight.

Theresa had a top dish tonight so did Brett and Elena. Heston said Elena’s dish belonged on the table of michelin star restaurant.

The three bottom dishes tonight belong to Chloe, Heather and Matt. They all missed the brief and failed to convince the judges of a connection between the flavours and the colour of the dish.

Heather has been eliminated from Masterchef tonight.