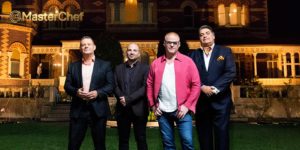 Tonight on Masterchef the contestants meet the judges and Heston at the beautiful Ripponlea estate. The contestants will be cooking from recipes from another era. They get two recipes, one savoury, one sweet. Mimi is cooking the first course, Theresa is on the second course, Elise is the third course and Harry has the fourth course. They have 2 hours to cook for 10 diners. The least impressive dish will send someone into an elimination.

Mimi’s 2 hours begins. She opens her recipe and it is written in old english. She has no idea what the recipe is saying. Her recipe is a salmon dish.

Theresa’s 2 hours begins. Her recipe is from 1490. She also has trouble reading her recipe. She decides to make a chicken roulade and is going to sous vide the chicken and then flash fry it in a pan.

Elise’s 2 hours starts. She opens her recipe and it a tart recipe. It’s an apple and fennel seed tart.

Mimi still does not understand her recipe and has no idea what she is going to cook. She is worried as Theresa has already started her dish. Heston and George get Mimi to read the recipe out loud to herself and she starts to understand the idea. She writes down the ingredients and finds her inspiration for the dish.

Gary visits Theresa’s bench and asks if she has time to make a roulade. He also questions if she has done this cooking method before but she replies she hasn’t, he comments that he hopes it works.

Elise is feeling really confident and happy that she has received a dessert tonight.

Harry’s 2 hours begins. He opens his envelope and he gets a recipe for a trifle. He is quite pleased and begins to make a coffee jelly.

Theresa gets her roulades into the sous vide cooker but she is worried that they will need the whole time to cook which doesn’t leave her any time to fry them off. She is also making a jus. Gary and George tell her that she needs to hurry up as they are worried she won’t get it all ready on time. The guests are arriving already.

Mimi panics as she sees all the guests arrive. Her dish needs to be ready in 15 minutes.

Harry has put his coffee jelly into the fridge to set and is making his custard. He thinks the combination of orange and coffee will go well.

Mimi begins to plate up her dish as she has 5 minutes before service.

Theresa takes her chicken out of the sous vide machine and she checks the internal temperature with a thermometer, the chicken is not cooked so she puts it back in for another 10 minutes.

Mimi takes her dish out to the judges. She has made a salmon fillet with mushy peas and a ber blanc sauce. They are happy with how it looks. Matt says it is a bright, light vibrant dish. Heston agrees that it definitely looks modern.

Theresa takes her chicken out of the sous vide machine and puts it into the deep fryer. She takes it out of the deep fryer and the skin has split and makes the chicken dry. She decides to pan fry them instead but is worried as she only has 5 minutes to plate up. Theresa gets all her elements on the plate but admittedly it was quite rushed and messy.

She take her dish out to the judges. They notice it is messy and the inconsistency between dishes. Gary likes the dish. Heston likes the raisins in the dish. George says it’s a good dish but he got so many raisins and it was just too many.

Elise begins to plate up her dish and she is happy with it. She takes it out to the judges. It’s a fennel nougat with an apple jelly inside. The judges taste the dish. Heston says it is fabulous. Gary loves the apple surprise inside. George says the flavour is spot on. He really loves the caramelised fennel. Heston says it is delicious.

Harry decides to add some chocolate snow to his trifle. He sees red wine in his recipe so he decides to add red wine to the chocolate. The first batch splits so he tries it again. He makes a second batch and it splits again. Harry is disappointed as he says his dish is just a trifle and it has no theatre. He has no idea what to do. Suddenly he decides to liquid nitrogen some fruit and smash it up to make a confetti.

Harry takes his dish out to the judges and adds the frozen fruit confetti at the table for the theatrical effect. The judges taste the trifle. Heston likes that the cells of the fruit have broken up into bits like hundreds and thousands. Matt says the coffee flavour leads more to a tiramisu rather than a trifle.

It’s time to find out what the judges think. Heston says it was a hard challenge and all of the contestants performed well. Matt tells Elise that her dish was so lovely that it could easily be her signature dish. Theresa is going into the elimination tomorrow. Her plates her inconsistent and the presentation was sloppy and messy.

Harry, Mimi and Elise are all safe.