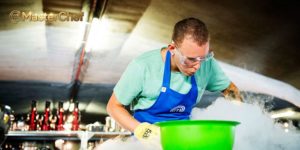 Theresa and Elise start planning their dish. They are making a box of chocolate, the chocolates will have coconut, raspberry coulis and a passionfruit puree inside.

Matt and Elena begin planning their dish. Elena has an idea on a Japanese garden with green tea jelly and pebbles.

Finally Harry and Mimi get to start planning their dish. Harry has the idea of making a forest floor with a soil base.

Theresa and Elise are making their chocolates but they are concerned that the individual chocolates are taking a long time.

Matt is making his raspberry coulis pebbles frozen using the liquid nitrogen and then dips the frozen pebbles into the milk chocolate.

Harry has made his chocolate logs and is now making some chocolate soil. He decides to add some pop-rocks to the soil.

Theresa and Elise are still making their chocolates with 15 minutes to go and they still haven’t finished their ice-cream. Gary asks if they are panicking yet? He says if they need to change anything on their dish that they should do it now. They start mixing their ice-cream with the liquid nitrogen but it is just getting lumpy. They decide to just serve it as a cream now instead.

The guests arrive at the pop-up restaurant.

Harry takes his chocolate logs out of the blast chiller and takes the acetate off. He slices them into smaller logs using a hot knife. He is happy with how they have turned out.

Elise and Theresa are plating up their dish while still trying to make their hand dipped chocolate. Service has started and the waiters start taking the food plates out to the guests but they are taking the plates that are not finished yet. Elise chases after the waiters and puts the final elements onto the plate. Heston receives his dish and notices that his is the only dish around the table missing a raspberry.

Heston likes the caramelised chocolate soil and the lemon cream. Matt loves the raspberry chocolate but thinks the dish overall is too sweet.

It’s time for the blue team to finalise their dishes before the waiters take them out to the guests. Matt and Elena are not quite ready but send out the completed dishes to the waiters first. All of their dishes are complete and they are thrilled. They just hope the judges like the concept.

The judges taste the dish and like the rocks in the garden but are not sure about the jelly at the bottom. Matt says the jelly is a little bitter and Heston agrees.

The judges love that the chocolate has been tempered so well. Heston is really impressed with the presentation. Matt likes the popping candy in the soil crumb. Gary says it’s a proper chocolate dessert that people would love to eat again. Gary says the whole table is deadly quiet as they are all enjoying eating it.

Harry and Mimi are safe today. It’s now between the blue team Matt and Elena and the red team Theresa and Elise.