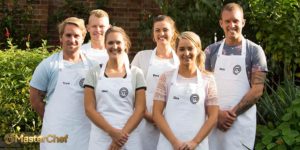 Tonight on Masterchef the final 6 contestants battle it out in a mystery box challenge. It’s finals week! Tonight in the mystery box it contains camel milk, pisco (Peruvian alcohol), kohlrabi, black King fish (Cobia), matcha, kaiserfleish, gochujang paste and mushroom leaves. They must use at least one of the ingredients out of their box and have their pantry staples except milk. They have 60 minutes to cook their dish.

Matt decides to use the black King fish. Harry also decides to use the fish. He is going to flame grill the fillet with some kohlrabi and the mushroom leaves. Mimi is cooking the fish with the kaiserfleish. Trent is also cooking the fish and he wants to make a sauce using the camel’s milk. Elena is also using the fish and she is curing it in the pisco alcohol. She is also going to make a crispy fish skin. Elise is using the matcha powder and is pouring a creamy mix for her parfait into sphere moulds. She is making a dessert today.

The judges go up to Matt’s bench. They question whether his fish will cure in time. Matt decides to vacuum seal the fish to speed up the process. Elise decides to candy her kohlrabi and is going to soak it in the pisco. Matt is making a savoury custard using the camel’s milk. Matt Preston tastes his custard and tells Matt that it is sweet. Matt decides to add some vinegar and is really happy with the result. Matt takes his fish out of the vacuum sealed bag, cuts it up and tastes it and he’s happy. Elena is making a gochujang caramel sauce to go with her fish. Trent tastes his camel milk sauce with a piece of his fish and he likes the flavours, he hopes the judges like it too. The contestants start to plate up their dishes. Elena is a bit disappointed with her caramel sauce as she has taken it too far. Harry is worried his fish isn’t cooked well enough so he puts it back in the frypan with minutes to spare. Time is up! 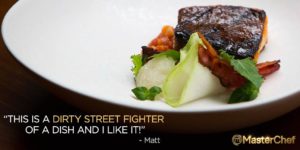 It’s time to find out who has won the advantage for the invention test challenge. The winner is Harry. George and Gary head off into the pantry with Harry. He gets to choose from three cooking techniques. They are smoking, sous vide and liquid nitrogen.

Matt decides to make a sweet dish. He is going to make a frozen coconut mousse. Harry is going to make a black sesame bavarois with a strawberry granita. Elena is making a savoury dish. She is cooking with cucumbers and is making a soup with a frozen yoghurt snow. Mimi is making a foraged mint slice. The judges walk up to Matt’s bench and tell him his frangipane tart mix has split. He adds more almond meal and puts it into the oven anyways. He doesn’t have time to remake the batter. Elise is making saffron mousse domes. Gary comments on the strength of the saffron she is using. Elise decides to trust her gut. Elena is making some gin soaked cucumber. Mimi is not happy with her mint ice-cream. She decides to puree the mint leaves into it. Trent is making a cake and a five spice ice-cream. Elise uses the liquid nitrogen to make her ice-cream. She is really happy with how it has worked out. Matt spoons his coconut mousse into the liquid nitrogen but he is unhappy with how they have turned out. There’s 10 minutes to go. Harry is making a fennel sorbet using the liquid nitrogen. He is happy with how it has worked out. Elena has made her frozen yoghurt snow using the liquid nitrogen. Matt decides to cut his cake in half and immediately regrets it. Mimi is still worried that her dish is not minty enough so she decides to deep fry some mint leaves as well. There’s one minute to go and the contestants are finalising the plating up of their dishes.