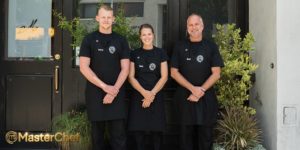 Tonight on Masterchef, Harry, Brett and Mimi compete in an elimination challenge. The contestants are met by the judges at their Intercontinental hotel. Tonight the contestants will be cooking at Curtis Stone’s restaurant Maude. They need to cook a dish that symbolises what the contestants want to do when this competition is all over. They have 90 minutes to show their dream on a plate.

The contestants arrive at Maudes and are greeted by Curtis Stone. Their time starts. Harry grabs some lobster from the pantry. Mimi is cooking a chocolate aero mousse with a whisky jelly and a honeycomb. Curtis tells her there are a lot of components in her dish. She is also making an ice-cream. Brett is making sous vide pork with some roasted fennel and brussel sprouts.

Mimi is using a syphon gun to help get lots of air into her mousse. She tries to pipe it into her dish but it’s not working out. She decides to make the mousse again. Brett is making a carrot and ginger puree. Harry is making a sauce for his lobster. Mimi has made her second batch of chocolate mousse. She tries to pipe it again and this time it works properly. She puts it into the freezer to set. Her ice-cream in churning in the churner and she gets started on her whisky jelly. Brett is feeling happy with how he is working in the kitchen today. He makes his roasted fennel and brussel sprouts. Harry is making another burnt lemon puree to go with his lobster. Gary tells him to be careful as the flavour can be too strong. Harry decides to make the puree anyways. There’s 30 minutes remaining. Brett has started to make a pork jus. He goes to grab some bones from the pantry to add some flavour to his jus. When he checks the pantry he can’t find anything suitable to add to his jus. He decides to grab some chicken stock from the pantry to add to his sauce. Mimi’s honeycomb is looking great. She then decides to make a caramel sauce. Harry can see that Mimi has lots of elements to her dish so he decides to add some more elements to his dish. Harry has chopped up his lobster tail and puts it into his marinade. Mimi is worried about her dish as she thought she had put her items into a freezer drawer to set but it seems that the drawer is not that cold after all. She finally finds a freezer and hopes that her dishes will all set on time. Brett takes his pork out of the sous vide machine and fries it off with some butter in a pan. Gary tells Brett that he could add some pork belly to his jus to make his sauce tastier. Brett decides he doesn’t have time. Mimi is starting on her lemon curd. Harry prepares to plate up his dish. Brett slices up his pork and he is happy that it is cooked perfectly. Brett also starts plating up. Mimi has to take her items out of the freezer to begin plating up her dish. Everything has set so she is very relieved. There’s a minute to go. The contestants quickly plate up their dishes and finish on time. Time is up! Harry has just realised that he forgot to taste his burnt lemon puree and he is not sure if it compliments the dish or not. 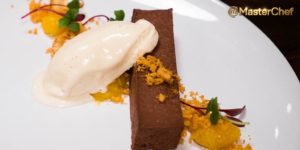 It’s time for the judges to taste the contestants dishes. First up it’s Harry’s dish. He has made lobster crudo with burnt lemon puree and a cucumber smoked broth. The judges taste the dish. Curtis says the broth was the stand out part of the dish. Gary agrees but he doesn’t like the burnt lemon puree. Matt agrees and thinks the lemon puree tends to dominate. Brett is up next. He has made meat on three veg. The judges taste the dish. Curtis likes the bright colours and fresh flavours. Gary says the pork is cooked beautifully. He says it’s brilliant. Matt says he would love this dish if the sauce was a classic sauce. Next up it’s Mimi. She has made a chocolate aero, honey ice-cream, whisky jelly and lemon curd and a caramel sauce. The judges taste her dish. The judges are very impressed with how her dish looks. Gary says that it is totally amazing, it’s the best dessert they’ve had all competition. Matt agrees and says it is the dessert of the competition. George says it may very well be one of the best desserts they’ve ever had on Masterchef and they all agree that Mimi is automatically through to finals week. Now it is only between Harry and Brett. Who will be eliminated tonight?