Tonight on Masterchef Matt, Mimi and Trent all compete in an elimination challenge. Tonight’s guest chef today is Christie Tania and the contestants will need to recreate one of her desserts with only 4 and a half hours on the clock. Christie describes her dish as terrifying. She then reveals the dish. They will be recreating her dish mystique. She cuts into it and reveals the many intricate layers of the dish. The contestants get to taste the dish. Christie talks them through the tricky parts of the dish. Their time begins.

This is Matt’s first pressure test so he is feeling a little nervous. Trent gets started on his marshmallow straight away. Mimi makes her marshmallow and pipes it into the mould. Matt makes his marshmallow but he is not happy with it. Christie tells him that his meringue was too cold when he put the gelatine leaves in and that is why it has not dissolved. He decides to put the meringue over a double boiler to try and dissolve the chunks of gelatine. Matt is feeling relieved. Mimi makes her passionfruit curd and pipes it 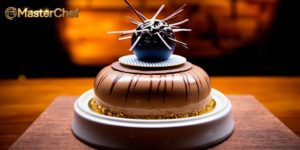 into the mould. Trent also gets his curd into the mould. Matt is concerned that his passionfruit curd is too thin but he uses it anyways. Trent gets started on the vanilla chocolate cream for the next layer. Matt has made another mistake with his vanilla chocolate cream. He can’t believe it. He decides to re-do his vanilla chocolate cream. He makes a second batch of the vanilla chocolate cream and he is happy with it. Mimi is making her banana milk brownies for the final layer of her mould. Trent also gets his brownie into the oven. Matt is catching up and gets his brownie into the oven too. The clock is ticking down and Mimi and Trent are powering ahead. Trent checks on his brownie and he is not happy with how well it is cooking. He takes it out of the oven to check on it but puts it back in the oven to cook it a little longer. Christie tells Trent that his brownie hasn’t cooked in time as he has made the layers too thick which means it will take longer to cook. Matt gets started on his hazelnut glaze to go over the cake. Mimi starts to assemble her cake. She takes the cake out of the mould and it looks great. She then puts the frozen part of the cake into the chocolate mousse inside another mould. Christie asks her where the brownie is, Mimi realises she has forgotten to put it in. Matt starts to de-mould his frozen cake from the mould. You can see that his meringue has not set properly. He places it inside the chocolate mousse mould. Trent finally takes his brownie out of the oven even though it’s still not set properly and he cuts it up anyways. He puts it on top of the mould and then cuts off an extra layer of brownie. He puts it into the mould with the mousse. There’s only 45 minutes to go. Mimi gets started on the tempering of the chocolate. The boys also get started on their chocolate elements. There’s 15 minutes remaining. Mimi begins assembling the whole cake now. She pours the glaze over the cake. Matt has also glazed his cake. Trent finally takes his cake out of the freezer but his cake has not set. It’s not smooth and frozen, it looks terrible. He tries to patch it up as best as possible. Mimi having trouble getting her blue domes out of the mould. Trent is also having trouble with his blue domes. Matt’s blue domes pop out perfectly but he cannot get his dark chocolate lace ones out of the mould so he improvises with another blue dome. Time is up and the contestants are all finished.

It’t time for the judges to taste the dishes. Trent is up first. He says he is very disappointed with how his cake looks. The judges cut into his cake and notice straight away that their is a lot of marshmallow but not a lot of passionfruit curd. Christie comments that the curd is what will balance the flavours. Gary says it looks like he’s in trouble. They taste the dish. Christie says the individual flavours of the components are good but they are not balanced all together. The next dish belongs to Mimi. Christie comments that the dish actually looks really good with the exception of the blue dome which was missing. They cut into the cake and the layers look great. The judges taste the dish. Christie says the chocolate is tempered well, the texture is there and the flavour is there. George says he is holding himself back from eating the whole thing, he quite enjoyed it. Matt is up next. He is worried that some of his elements are not good enough today. Christie likes the look of the dish but notices he doesn’t have the lace dome. They cut his cake open and can see that the layers are good but his passion fruit curd is not set. They taste the dish. Gary says there’s no doubt there are mistakes in there, the passionfruit curd especially. George says the flavours are good though. Christie says he nailed the brownie the best and she liked his glaze.

It’s time to find out who is going to be eliminated tonight. Trent has been eliminated from Masterchef Australia tonight.