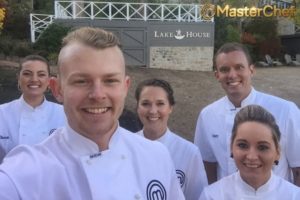 Tonight on Masterchef the final 5 contestants will be competing in a challenge at the 2-hatted Lake House restaurant in Daylesford. Gary tells the contestants that the contestants who cook the three worst dishes tonight will battle it out in an elimination tomorrow. Matt welcomes Alla Wolf-Tasker who is the owner/chef at Lake House. The contestants need to cook 5 dishes from the menu, each contestant will be responsible for one dish each. Alla has put together the menu for them the courses are in the order of smoked eel, chicken, kangaroo, plum and berries. They need to cook for 40 guests including the judges in 2 and a half hours. It is a staggered start depending on what dish they are cooking.

Harry runs to the kitchen to get started on his eel dish. Harry gets to see an example of the dish he needs to cook, Alla describes it to him and he tastes the dish. Mimi now runs into the kitchen and gets to see her dish. She listens to Alla explain the dish and then she tastes it. Alla says the timing of this dish is very important. Elise now goes into the kitchen, she goes through the same process with her kangaroo dish. Gary tells all three that they are not working hard enough and that they need to hurry up. Harry discovers that he has left a whole heap of bones in the eel, Alla explains that he didn’t cut the eel on the right angle. He will need to pin bone all the eel now. He decides to cut up the eel and keep the pieces with the least amount of bones to pin bones. Now Elena gets to see her dessert. She tastes the dish. Matt is in charge of the final dish today. He gets to see his dish and taste it.

Mimi is feeling a little concerned as the salsa verde has taken her a long time. Harry is rolling his smoked eel in the prosciutto and has to make them a little smaller than they should be as he hasn’t got enough eel. Matt gets started on his chocolate for the chocolate logs. Harry has 10 minutes before his dishes need to go out. Mimi is still really stressed as she knows her course is going out next. She is no-where near ready. Alla asks Mimi where her chicken stock is for the jus gras and she hasn’t put it on yet. It would normally take about an hour to cook and she only has 40 minutes remaining. Mimi starts to get emotional and overwhelmed, George tells her to get it together and to stop crying. Mimi decides she doesn’t have time to follow the recipe word for word so she is just going to trust her instincts to be able to get something on the plate. Harry plates up his dishes and they get send out to the judges and the guests. The judges taste Harry’s dish. smoked eel with beetroot crisp. The judges notice that the eel roll should have been bigger. Gary says he has done a pretty good job. George says the eel is beautiful. Matt says the shortfall of the dish is the lack of eel on the plate. Mimi is up next. Her chicken is not ready and her jus gras has not reduced enough. She finally gets her dish plated up and it gets send out to the judges. They taste the dish. Gary says the wheels have fallen off the wagon with this dish. George says the jus gras is just not right. Matt says the chicken is well cooked. Elise is up next with her kangaroo dish. She has finished her kale puree but she hasn’t tasted it. She finally tastes it when Alla tells her too and it is quite bitter. Elise plates up her dish and it goes out to the judges. They taste the dish. Gary likes the roll and the kangaroo, so does Matt but the kale puree is way too bitter. Elena is up next. She is working on her plum jelly rolls. Matt is making his pistachio sponges. He has a lot of elements to make. Elena is up to rolling her mousse in the jelly. The first one she tries doesn’t work out, she is worried that her jelly is too thick. She decides to cut squares of the jelly to drape over the mousse instead of rolling them. Elena’s dish goes out to the judges. They taste the dish. Gary loves the rosemary sorbet. Matt says the plum jelly around outside is too thick. Matt is up next. Alla is impressed with his preparation. He begins the plating up of his dish. Matt’s dish goes out to the judges. They are impressed with how it looks. The judges taste the dish. George says he loves it and everything is done really well. Gary says it is very close to Alla’s dish. Matt Preston says this dish is good enough to be served any day in this restaurant. Alla is really impressed with Matt’s performance too.

It’s time to find out what the judges thought of the contestants cooking today. Gary says the two best dishes will be going through to the finals and the three worst dishes will be going in to tomorrow’s elimination. Gary tells the contestants that the best dish of the evening belonged to Matt. George says Mimi and Elise struggled in the kitchen today and that they are both in the elimination tomorrow. So now it’s between Harry and Elena. Elena is safe and will be joining Matt in the quarter finals. Harry, Mimi and Elise will be competing in an elimination tomorrow.