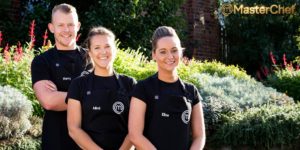 Tonight’s Masterchef Elimination, Harry, Mimi and Elise all battle it out in an elimination challenge. They arrive in their black aprons at Masterchef headquarters. The meet the judges standing in front of them. Matt tells them that today’s challenge is about celebrating how far they have come since their first cook. The pantry of foods are revealed to the contestants. There’s one box of ingredients for each contestant. The judges want them to use their ingredients to cook a new dish to show how far they have come in the competition.

Harry is cooking with lobster today. He is going to make a lobster bisque, a raviolo and a butter poached lobster tail. Elise is making a chocolate, orange and pistachio brownie with an orange ice-cream. Mimi is making a dessert, she is making a fig ice-cream with goats cheese inside. Harry is going to add coriander to his pasta to make the dough green. Matt Preston questions whether a raviolo is a bit week three, he’s not convinced with the dish. Harry is not sure what to do now. He chats with Matt up on the balcony and decides to trust his instincts and is going to make some chicken dumplings. Elise has made the anglaise for her ice-cream. She starts on her chocolate brownie. She puts it into the oven and hopes that it cooks in time. Mimi is making her fig-jam ice-cream. Harry rolls out the pasta for his dumplings and the judges come past and taste his bisque. George and Gary tell him that it needs more flavour. It’s tight, who will be eliminated from Masterchef tonight?

Elise checks on her brownie but it’s still not ready. She turns the heat up in the oven. Mimi puts her fig-jam ice-cream into the churner. She gets ready to make her goats cheese component when she suddenly realises that it is ricotta cheese she has not goats cheese. This is going to change her whole dish, she doesn’t know what to do. Elise’s brownie is still not cooked and she needs to cool it down still before she puts the mousse on top. Harry cuts the pasta up for his dumplings and then fills them. Mimi decides to smoke the ricotta to see if she can bring out some flavour in it. Elise takes her brownie out of the oven and puts it straight into the blast chiller. Harry is still concerned about the lack of flavour in his broth. Elise takes her brownie out of the blast chiller and then tops it with the mousse and puts it straight back into the blast chiller. Mimi decides to make a chocolate caramel sauce to go with her dish. Elise checks on her brownie and mousse and it’s not set. There’s 3 minutes left on the clock and it’s time to start plating up their dishes. It is coming down to crunch time in this Masterchef elimination. Elise cuts into her brownie and it’s sinking as she cuts it. It’s not cooked. She is trying to get one good slice of the brownie and mousse. She doesn’t know what to do and has nothing else to serve to the judges. All of the contestants are rushing to get their dishes completed on time. Time is up! 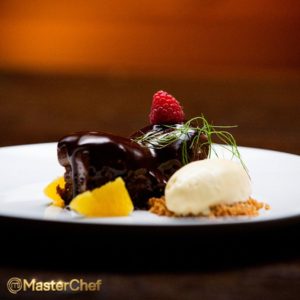 It’s time for the judges to taste the dishes. Who will be eliminated tonight? Elise is in tears as she feels her dish is not good enough tonight. The first dish the judges taste belongs to Harry. He has made butter poached lobster, coriander and chicken dumpling and a lobster bisque. The judges taste his dish. Gary says the dumplings were beautiful. George says the pasta was silky smooth and green and vibrant. Matt says the lobster tail was well cooked but they all agree that the bisque is not up to the usual standards. Mimi is up next. She has made fig ice-cream, smoked ricotta and a prosciutto shards. The judges taste the dish. Matt likes the shiny glossy sauce and he likes the fig ice-cream. He says it shows lots of technical skill but he says the ricotta just ruins the dish. Gary doesn’t think she is safe at all. Elise is up next. She has made a chocolate, orange and pistachio brownie with chocolate mousse and orange ice-cream. The judges taste her dish. Gary says it is delicious. George says it’s yum. Matt says it’s ok to have an undercooked brownie, it’s not like serving undercooked chicken.