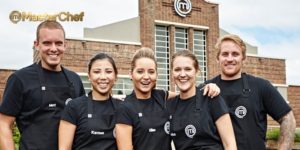 Tonight on Masterchef Matt, Mimi, Elise, Trent and Karmen will all compete in an elimination challenge.

The contestants arrive at Masterchef headquarters. They can see 5 mini pantries set up behind the judges. Today’s challenge is a time auction. The first pantry means they can cook with 90minutes on the clock. If they decide not to use it then they need to wait for the next pantry 15 minutes later, so if they choose the next pantry they have 75 minutes to cook and can use both of the pantries.

If they wait for all 5 pantries to be revealed they can use all the ingredients but they will only have 30 minutes to cook with.

Time starts and no one chooses the herb pantry. The second pantry is revealed. It is a variety of vegetables. Karmen, Trent and Matt all choose to cook with the vegetables. They all have 75 minutes to cook. Karmen is making a mille fuielle with a basil ice-cream. Trent is making a pumpkin ritolo. Matt is making a tortellini.

The third pantry is revealed. Mimi and Elise are waiting for it. It’s fruit so both girls are really pleased. They have 60 minutes to cook. Mimi is making a beetroot and rhubarb parfait. Elise is still choosing her ingredients. Elise is making a parfait with a passionfruit sauce.

Karmen is making her mille fuielle pastry. George asks Trent if his dish is going to be full of flavour. Elise explains to Matt that she is using lots of fruit, he asks if she has too many flavours on the plate. The contestants have 10 minutes to go and they begin plating it up. Karmen is running out of time, there’s 30 seconds left.

Trent is up first for judging. He has made a ricotta and pumpkin ritolo with cauliflower. The judges say the dish looks good. George says it’s a clever dish. It’s a rich meaty dish and a buttery sauce. Gary says it’s yummy. Next up is Karmen. She has made a tomato and ricotta mille fuielle with a basil ice-cream. Matt says he thinks Karmen may have a problem. The judges look less than impressed when eating the dish. Gary likes the idea of the dish. Matt doesn’t like the ice-cream. Gary does however like the puff pastry. Matt is up next. He has made roasted carrot tortellini with confit leeks and burnt butter sauce. The judges taste the dish. Matt says wow, how absolutely delicious. He loves the acidity of the tomatoes. George loves the smokiness in the leeks. Gary says it’s a beautiful dish that sings. Next up is Elise. She has made a charred apricot parfait with a passionfruit curd. Gary says there are a lot of flavours going on there. George says it reminds him of fruit loops. He says it’s confusing. Matt likes the parfait and the crumble. Next up is Mimi. She has made a beetroot parfait with rosemary shortbread and a beetroot caramel. Gary asks if there is any more syrup as he loves it. The judges are really enjoying the dish. George says yum. Matt says yum plus. Gary says yum plus plus. George says it’s a clever dish. Who will be eliminated?

It’s time to find out who will be eliminated tonight. Mimi, Matt and Trent are all safe tonight. It’s between Karmen and Elise. Karmen has been eliminated from Masterchef tonight.