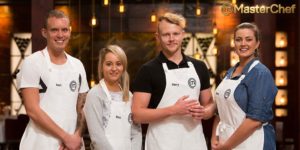 Tonight on Masterchef it’s the judges turn to cook. The contestants arrive expecting to be receiving a master class. The doors suddenly open and all of the past contestants return. Matt tells the contestants that they will be starting with a mystery box challenge today but it’s not for the contestants it’s for the judges Gary, George and Shannon Bennett.

The mystery box is revealed as having one thing for every mystery box this year. The judges have 60 minutes to cook. The ingredients are cauliflower, ginger wine, monkfish, kohlrabi, garlic, dates, fennel pollen, white miso, parsley and lime.

Their times starts. Gary is going to use the cauliflower and the monk fish and dates. Shannon is making roasted monkfish with a broth. George is making a kohlrabi canneloni with a buerre blanc miso sauce. The judges start plating up their dishes with 3 minutes to go. Time is up!

The second challenge for today is an invention test, but today’s challenge is going to be done in teams, the contestants vs the judges. As there are 4 contestants one has to sit out for today and Matt volunteers to sit out. The judges get to choose an ingredient each from the pantry then the contestants get to choose one of the three to cook with today. Gary chooses mussels, George chooses mandarines and Shannon chooses brussel sprouts. The contestants choose mandarines as the core ingredient today. Elise is going to cook first today and so is Gary. They all have access to the pantry and have 60 minutes to cook. 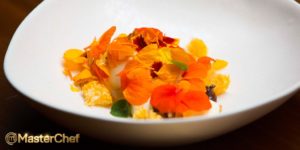 Elise is making a mandarine dessert. She is making a pannacotta in a dome mould. Gary is making quail breast with mushrooms in a mandarine and star anise broth. Elise is also making a mandarine granita and a jelly. It’s changeover time, now it’s Elena and Shannon’s turn to cook. Elena gets started on a spiced crumb and a bitter chocolate ganache. Shannon is cooking some mushrooms and is going to make some pickled turnips. He is also poaching the quail breasts in stock. It’s change over time again. Harry and George are the final cooks tonight. George is finally using some mandarine to add to the dish. There’s 10 minutes to go. Harry and George start plating up the dishes. Time is up!

It’s time for both Matts to taste the contestants dish. They have made a mandarine pannacotta, mandarine jelly and granita. They taste the dish. Matt Preston says it’s a really beautiful dish and he expects nothing less from the top four. The judges are up next. They have made poached quail breast with pickled turnip. Matt the contestant tries the dish and crunches down on a quail bone. The judges have forgotten to take out one of the bones. Matt the contestant says its an incredible dish. Matt Preston agrees and thinks it’s a really delicious dish.

It’s time to find out who has won in the competition between the contestants and judges. The contestants have won as the judges had left a bone in their quail.

2 thoughts on “Masterchef Mystery Box For The Judges”