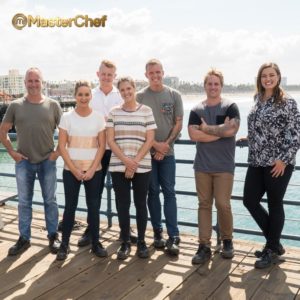 Tonight on Masterchef the contestants will be running their own food trucks at Santa Monica Pier. This is a team challenge so the teams will be split into two. Elena is through to finals week so she won’t be cooking tonight. They teams pic a token that tells them which team they are in. Red team, Harry, Brett and Mimi. Blue team, Matt, Elise and Trent. Each team must create 2 items for their menu, they have 2 hours to prep and have to feed 200 people. The judges will be judging which team does the best today. The winning team will be safe but the losing team will be going into an elimination tomorrow.

Harry decides to skewer the prawns but Brett is worried that it will take up too much time. Elise is charring the corn for the salsa. Mimi making the corn tortillas. Matt is cooking the chicken inside the food truck. He is colouring the skin on the grill and then going to pop them into the oven to finish them off. Mimi is frying up the corn chips but she is really concerned about how long it is taking and she’s worried they’re going to run out of time. Gary tells Harry that he’s not sure they’re going to have enough time to skewer all the prawns. Elise gets started on an apple and ginger beer slaw. Brett is really stressing as he doesn’t think they’ll be ready on time for service.

There’s 30 minutes remaining of prep time. Harry gets started on the tortilla mix. He has started to realise that they will run out of time as pressing out the tortillas will take quite a while. The crowds start arriving for their food. Brett decides to take charge of his team and tells them they need to cook one thing together until it’s done. Elise questions whether the large serve of a quarter of chicken is too difficult to eat. Matt agrees and they decide to chop the chicken up to serve it to the customers. Mimi goes to write the menu on the chalkboard and asks Harry what she should write. He says there will be no tacos, so she is confused. How can they serve soft shell crab tacos with out the tacos. He tells her to write soft shell crab with a fennel salad. The blue team has begun plating up their dishes and are happy with the presentation of their dishes. Service time starts. 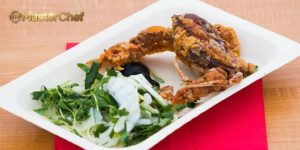 The judges taste the first dish from the red team, the soft shell crab and fennel salad. Wes says he is disappointed that it’s not a taco. Gary loves the well cooked and golden crab. The next dish is the blue team’s seared tuna with salsa. Matt says it’s fresh and light and it zings. The blue team is selling lots of tuna but not many people are interested in the chicken which is making Matt very concerned. The judges taste the blue team’s chicken dish. Matt Preston is concerned that it is a little hard to eat. Gary says the chicken is great and super juicy. Wes says there is a nice charring on the skin. Matt Preston says the chicken is delicious. Gary says the blue team have produced two great dishes today. The judges taste the red team’s prawn and salsa dish. Gary says it’s a lovely light and fresh dish. George refuses to eat his prawn though. They have left the poo vein in the prawn.

The red team sells out of all their dishes and so does the blue team. It’s time now to see what the judges thought of the dishes and to see which team is going into the elimination tomorrow. The judges tell the blue team that they enjoyed both of their dishes. They tell the red team that they loved the soft shell crab but it would have been better in a taco, and then he tells them they have made a huge mistake leaving the poo vein in the prawns. The red team of Harry, Brett and Mimi will face an elimination tomorrow. The blue team of Matt, Elise and Trent are safe and will be joining Elena in finals week.