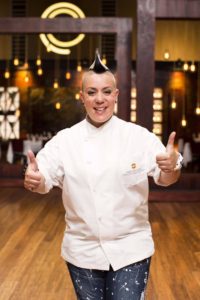 Masterchef Elimination tonight is with Anna Polyviou and her dish the Death Star. Nicolette, Harry and Charlie must recreate this dish. Unless Nicolette uses her immunity pin, in which case, Elise will step in to the elimination. Who will be eliminated tonight?

The contestants arrive at Masterchef headquarters. It’s time for Nicolette to decide whether to play her pin or not. She decides to use the pin which means that Elise will now take her place in todays pressure test elimination.

Matt introduces it as one of the most difficult pressure tests yet. Anna Polyviou arrives carrying a cloche. She tells the contestants there are 74 steps in the dish today. She lifts the cloche to reveal a dish called Anna’s mess. Harry says it looks like a pink Death Star. Anna then picks up the sphere shaped dessert and then smashes it down on the plate. The contestants examine the dish. It has a white chocolate mascapone vanilla mousse, a raspberry curd, meringues, fresh raspberries, raspberry curd, baby basil leaves and lots more. Anna says the most difficult part is tempering white chocolate.

The contestants have 3 hours to make the dish then they have 15 minutes at end to assemble the dish. Their time starts.

Elise gets started on her meringue kisses as does Harry. Charlie is working well as he enjoys making desserts. He has made his meringues and is making his sponge. Harry just notices that he has forgotten to put the sugar in his sponge which is already cooking in the oven, he has to make it all over again and it is going to cost him a lot of time. Will this mistake ensure he is eliminated tonight? He re-makes his sponge and double checks the recipe this time.

Harry gets started on his white chocolate mousse. Charlie is also up to the same step. George yells and tells them they have 30 minutes remaining. Elise is panicking a little and is having trouble with her white chocolate mousse. Elise and Harry get their raspberry domes out of the moulds and into the freezer but Charlies have not set and are all runny. He puts them into the freezer anyways.

Charlie gets his white chocolate domes out very smoothly. Harry is ready to take his out. His are not coming out easily. Elise is also having trouble getting her domes out, she can see cracks forming in the domes. Harry starts smashing his moulds onto the table to try and get them out. Both Harry and Elise are starting to stress out.

Charlie has managed to get everything ready with time to spare. Harry and Elise are still struggling with their domes. There’s only two minutes remaining. Elise breaks one of her moulds. She only has 3 remaining and she is freaking out. Harry starts blow torching his dome in desperation but Anna yells that he should not blow torch them. Finally Harry and Elise’s domes come out. There’s 10 seconds remaining and then time is up.

Harry is up first, he starts to assemble his dome and adds in all the elements. He is concerned about the size of his meringues. He takes his dish in to the judges for tasting. Anna looks at it and says wow. He picks it up and smashes it on the plate. Anna says the chocolate looks lovely and thin. The judges taste the dish. Gary says the mousse is beautiful and smooth. Anna says the meringues are not great.

Next up is Elise. She is unhappy with her mousse as it’s too runny. She finishes plating it up and takes it in to the judges. Elise is asked to smash the sphere and she does. You can see her mousse is runny as it has splattered everywhere unlike Anna’s. The judges taste the dish. Gary says it looked amazing. Anna says the curd is great and overall she has done a really great job. The judges comment that the mousse is not quite right.

Finally it’s Charlie’s turn to bring his dish into the judges. He smashes it on to the table in front of the judges. The judges notice that the chocolate is quite thick and the dome doesn’t smash properly. Anna notices that the curd doesn’t look like it has gelatine in it. They taste the dish. George loves the meringues. Gary says the balance of the dish is not quite right.

Anna kindly offers Charlie some work experience at her kitchen at the Shangri-La in Sydney.