On Marco Pierre White week tonight on Masterchef Australia the three contestants who cooked the least impressive dishes yesterday in the mystery box challenge will need to keep up with cooking with Marco tonight. The three contestants are Con, Cecelia and Nathaniel. Who will be eliminated in tonight’s pressure test.

The contestants arrive at Masterchef headquarters and are greeted by Marco and the judges. Gary reminds them that one of them will be going home tonight. The contestants are told that they have no recipe, no dish to taste, instead they have to keep up with Marco. All of their instrutions will come from Marco, the two dishes that come the closest in look and flavour to Marco’s will be safe. The dishes need to be ready 10 seconds after Marco has finished cooking. The dish is John Dory alla Nicoise.

The contestants get behind the benches and Marco tells them to get their fish. They begin to fillet the fish under Marco’s instructions. The boys are struggling with removing the skin. Cecilia has replicated Marco’s fish quite well. Marco moves on to the next step and the boys are left behind. Suddenly Con cuts his finger and is now even further behind. Marco gets started on preparing the fennel. Then he begins the shallots then the garlic. Cecilia is still keeping up with Marco. Con has had to leave some components out of the dish as he is running out of time. The contestants skin the tomatoes, cut them into quarters and remove the seeds. It’s time to cook the fish. The contestants are not sure how well they have cooked their fish. All the elements are now ready to be put together. It’s time to start plating up. The contestants all complete on time and Marco comes across to shake their hands. It will all come down to taste and technique. 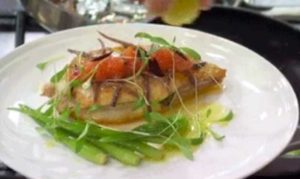 The judges taste Marco’s dish so that they have something to compare the other dishes to. The first contestant to bring their dish in is Cecilia. Marco was very impressed with her performance in the kitchen today. The judges are impressed with the overall presentation of her dish. Gary says she has cooked the fish really well but she has over salted the tomato. Marco says she has done a fantastic job. The next contestant in is Nathaniel. He is not overly confident in his dish, his hands are shaking. George comments that the presentation of the dish is not quite right, especially preparing the fennel wrong. They also comment that the size of the fish is smaller than Marco’s and could be overcooked. The judges taste his dish. George says the fish has great colouring, Matt likes how well the dish was dressed. George mentions again how the fennel was prepared incorrectly, the tomato was over salted again and the fish was overcooked. Finally it is Con’s turn to present his dish to the judges. Marco tells Con that he was pleased with how he persisted and completed the dish. The judges notice on the presentation of the dish that the blood line is still in and bones are sticking out. They taste the dish. Gary says his piece of fish is nice and moist. Marco says the dish eats better than it looks. The judges now need to decide who will be eliminated tonight.

Cecilia is safe, Marco was very impressed by her performance tonight. Now it is between Con and Nathaniel.

Nathaniel was eliminated from MasterChef Australia 2016.