Tonight’s Masterchef Immunity Challenge was between Matthew, Ashleigh and Rose. One of these contestants will cook off against the guest judge with a chance to win immunity.

The challenge was “Grandmother Kitchen”, it was a sticky date pudding challenge, but they only had the utensils from grandmothers kitchen. This means there were no powered appliances, only hand operated tools.

The contestants had 60 minutes. Matthew was at a disadvantage here, desserts were not his thing. Ashleigh already had an idea for a recipe in her head. It was a family recipe and she was off the mark quickly. 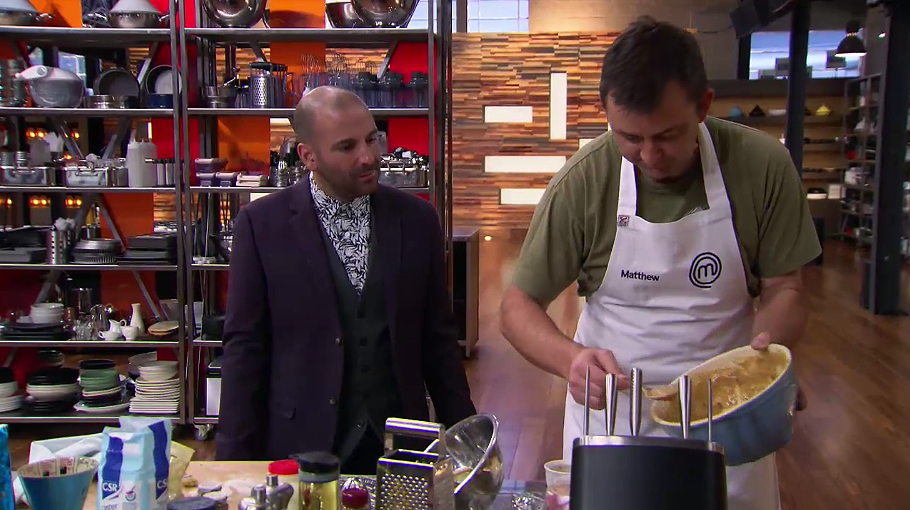 The contestants had to use old saucepans, like their grandmothers used. They were thin, which meant they were hot, it was a lot easier to burn things. Matthew burnt his caramel, rose was trying her hardest not to burn hers, but the sugar seized. Ashleigh was quite happy, she learnt to cook with these tools.

Matthew’s puddings were out of the oven, he covered it with his sticky date sauce. The peanut gallery hoped he balanced out his bicarb soda, he had put a tablespoon in his mixture instead of a teaspoon.

With 15 minutes to go, Rose’s puddings were also out. Asleigh was testing hers with a knife. She also took hers out too, but tried to get them out the the tins hot, which made them come out messy. She was a bit disappointed. She covered them with sauce to try and hide the imperfections.

Rose tasted her puddings, something was not right. They were really dense, she must have taken too much air out of the mixture. She had to try and fix it, but there wasn’t much time left. She put a syrup over the top and is making a lemon cream to try and balance it out.

Time was up. Everyone had their dishes ready and plated up.

The first dish to be tasted was Rose’s. Gary said the sponge was heavy and dense, but the sauce was great. Shannon loved that the dish was leaning towards “middle eastern”. Matt liked the lemon in the cream, it lifted up the dish.

Next was Matthew’s sticky date pudding. The judges loved the look of his dish. The could taste the bicarb, there was too much in it. Gary said it was “seriously delicious”, there was loads of sauce, but when you finished, there was a metallic bicarb taste left in your mouth. Matt said it was great, apart from the obvious error.

Finally it was Ashleigh’s sticky date with salty ginger caramel sauce. Gary said it was beautiful, “absolutely gorgeous”. Shannon said “you have taken the classic and turned it into the modern”. Gary said “100% winner of the round”.

Ashleigh was through to round 2.

The guest chef tonight was Jim McDougal, he worked under Shannon Bennet at Vue De Monde and is the head chef at Black Stump Bistro in Mildura. Ashleigh had to choose between “North” and “South”. The North choice had lots of tropical foods, where the South had fish and vegetables. She chose the North ingredients.

Jim was making a smoked butter fish. He was using tea and coconut husk to make the smoke. He put the butter on top, and made the smoke. He had to quickly put it in the blast chiller before it melted. Back and forth until it had a nice smokey flavour, it was an amazing technique.

Jim is making a smoked butter sauce. He adds fresh coconut water and some vanilla bean to add more complexity.

Ashleigh decides to add a ginger syrup to her dessert.

Jim is baking his fish in the oven, he places a piece of the smoked butter on top before he puts it in. He checks on his fish and it’s not cooking fast enough. He decides to take his fish out and finish cooking it in a pan.

First up to be judged is Jim’s dish. George cuts the fish open and it’s cooked beautifully. Gary loves the sauce, although he says it is a strange flavour, it’s like a custard. George described it a bit like melted ice-cream. The judges aren’t really sure about the dish.

Ashleigh’s dish is next. The judges assume straight away that it’s Ashleigh’s dish. Gary is concerned about the chocolate mousse as he knows it is not Ashleigh’s forte. The judges taste her dish and George licks the plate clean. Gary says it is nice. George says he is happy as it is so delicious.