Tonight’s Masterchef Elimination is between Stephen, Georgia and Amy. Who was eliminated from Masterchef Tonight? It is a pressure test by Guillaume Brahimi, a french cuisine chef from Australia. His dish, Jewel of the sea, was a sea urchin dish with a mixture of different sea foods inside. 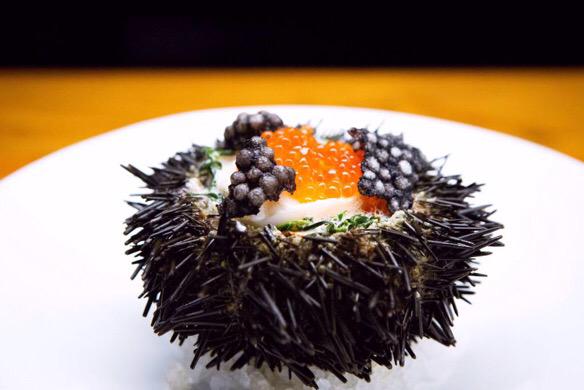 The contestants had 2 1/2 hours to recreate this dish. Georgia was first to start cooking, she only skimmed the recipe. Amy read every step thoroughly, but this left her behind.

Georgia was quite comfortable with cooking seafood, her dad was a fisherman and she was having no problem with the lobster and squid components. She was up to the sea urchin, she hadn’t made one of these before and preparing them was really hard. They had to remove the tongues.

Stephen had no problem with the sea urchin. Last to get to this step was Amy. She was ok with this step too, but she might not have left any sea urchin tongue for her garnish.

Georgia mixed her butter with the sea urchin tongues. She went to grab her corn puree, but realised she had actually mixed the butter with the corn puree. She was in trouble. She had to salvage as much as she could from her dirty dishes.

Stephen was on to the custard, he was the first one to get there. With 1/2 an hour to go, he noticed he forgot to put the squid in the freezer, he quickly put it in, hoping it will freeze in time. Amy took her lobster tail out of the pot, but it was still raw, it had to go back in.

Amy was the first to start plating up, followed by Georgia and Stephen. Stephen had hardly any sauce left, but it looked great. Amy was missing the urchin tongues on the top of the dish and Georgia managed to get it all in the dish.

First up to be judged is Georgia. Gary says the sauce is lovely, the calamari is cooked well. Guillaume says it’s delicious. George says she’s made a tasty dish.

Stephen is up next. George says he’s done a really good job for an amateur cook. Guillaume says the squid is too thick but there’s no sauce to tie it together.

Finally Amy is up next. Matt says that it is delicious. Gary says the lobster is cooked well and he loved the sauce.

Stephen was eliminated from Masterchef tonight.

8 thoughts on “Masterchef Elimination – Stephen vs Georgia vs Amy”