Tonight was the masterchef team challenge. It was a mexican street food challenge serving over 500 people in Melbourne. The winners will be the team who makes the most money.

The red team was mentored by previous masterchef contestant Ben

The red team were off to a bad start, they didn’t really plan their menu before they had to go and shop. Sara decided to do the shopping but that left the team with no leader to make the decisions. The team decided to make their own decisions. Jessie and Ava were making the chicken salad. John and Stephen were making a chicken adobo and Georgia was making a mexican “mess” which will be made up of berries and lime. 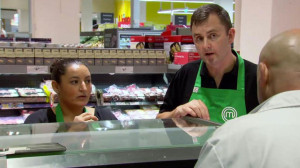 With 20 minutes to go Sara writes up the prices on her menu board. Jamie puts his prices up shortly after. Sara has priced her food quite low and Jamie has priced his a little higher.

500 people are waiting outside to be served and it’s service time!

Food is being snapped up quickly by the hungry customers and the teams are struggling to keep up with demand.

One lady has returned some raw chicken to the red team. Sara quickly replaces it.

Raw chicken is returned to the red team again by the same lady. Ben advises Ava to get the chicken into the oven to complete it’s cooking.

With an hour remaining both teams are still under the pump.

The judges are tasting the green team’s dishes. The judges love the corn with the cheese on top. The like the freshness of the beef dish. Matt questions where the real Mexican flavours are, the avocado, tomato and lime. The judges then taste the churros, Gary is concerned that they are not crunchy.

Sara decides suddenly to change the prices of the food for the red team, she is concerned that she has underpriced her food. She climbs up on the bench changes the prices on the blackboard. Some customers were questioning why she had suddenly put up the price.

Now it’s time to taste the red team’s dishes. They tasted the red team’s corn, but they weren’t super impressed. The judges seemed to enjoy the chicken dish. Gary loved the “Mexican” mess for dessert.

In the last few minutes Sara decides to sell it all half price. The green team also decides to discount their food.

Both teams have performed really well. Who will win the team challenge today?

Both teams together raised around $12,000 which will be donated to the national Breast Cancer foundation.

The winner of tonight’s team challenge on Masterchef is the green team.