Tonight was the Masterchef Immunity Challenge with Georgia, Anna and Ava. The first round was a kitchen “triathlon”. The contestants had to dice an onion, whip three egg whites and joint a chicken. The winner of the triathlon round will get to cook for immunity.

Anna was first to finish the onion, but had to re-do it because there were large chunks in it. Ava cut herself and put her behind. Georgia was in the lead. Georgia and Ava were both whipping their egg whites while Ava was still chopping onions.

Georgia was first to start jointing the chicken. Anna wasn’t far behind, she was jointing the chicken “like a professional butcher”. It was close, it came down to the last few seconds. Anna could see Georgia was still chopping, so made sure everything was perfect before putting her hand up. She won and is going to cook for immunity.

Tonight’s guest chef was Callum Hann, the runner up from Masterchef Season 2.

The two choices tonight were black foods versus white foods. The black side had liquorice, mussels, blackberries, black pudding, dry aged beef among other things. on the white side there was flours, dairy, chicken, cheeses and more. 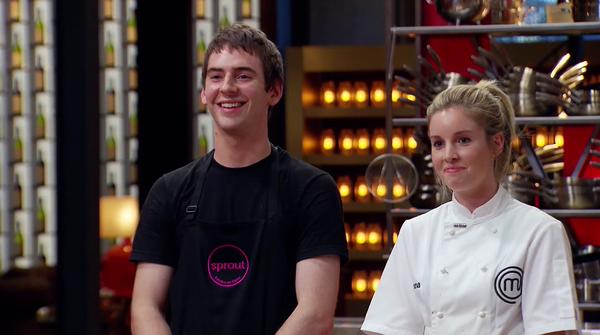 Shannon, and the rest of the judges and contestants were suprised, this was by far the hardest choice. Anna chose the dry aged beef as the protein with some blackberries and goats cheese. She used the fat from the beef as the oil.

Anna goes back to the ingredients bench and picks up some mushrooms and truffles to make a puree.

She has lost track of time and hasn’t been watching her beef. She takes it out of the oven and checks that the temperature hasn’t gone over sixty degrees. The thermometer stays around fifty two degrees so she decides to leave it out of the oven.

Callum has made a grey eggplant puree by mixing eggplant and black salt. He is not keen on the colour.

Anna is slicing up her beef and it’s cooked beautifully.

Callum decides to do a second puree and goes back to the ingredients bench and finds some pomegranate molasses.

Both contestants start assembling their dishes with 5 minutes remaining. Will Anna win the immunity pin tonight? It was up to the judges.

The first dish to be judged was Callum’s black pudding, goats cheese and carrot salad recipe. The judges said it looked really really good. George said it had a great texture and it was a really nice dish. Matt liked the balance of the berries with the goats cheese. Gary liked that the crunch of the carrot but didn’t like that there was too much goat’s cheese.

Anna’s dry aged beed with carrot and berry salad and puree recipe looked “kind of scary”. Gary said the beef was cooked spot on, and thought the use of the goats cheese to season the carrots was a good idea. George didn’t liked the puree, it didn’t have enough flavour in it and the consistency wasn’t great. Matt said you feel cheated without a dense mushroom sauce.