The mystery box contained figs, blue cheese, rosmary, honey, kaiserfleisch and apples among a few more ingredients. The contestants had to use every ingredient in the box. All the contestants did well in this round. 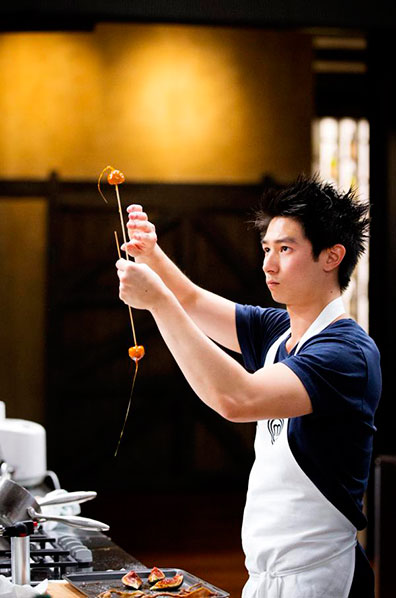 The judges tasted Reynold, Matthew and Jessie’s dishes. They loved them all, but said Jessie’s was something special, they had never tasted a dish in the competition this good. She won the power apron.

The judges revealed that the winner of the next round will send the winners to a round where there will be guaranteed immunity. Because Jessie won the first round, she had a 30 minute advantage.

Matthew is next, he has cooked duck three ways. George says it’s not too bad, he did not enjoy the duck confit.

Sara is next. She has cooked cauliflower three ways. Gary loves that there is lots of flavour in the dish. Matt also enjoyed it.

Ashleigh is up next. She used strawberries three ways.

Stephen is up next. He has cooked onions three ways with roast beef. The judges aren’t impressed.

Georgia has used lemons three ways. Her sorbet did not work. Matt says the sorbet is a problem.

Billie is next. She has made fennel three ways. Matt loves it, he says it is modern and interesting and tasty. George says it is very creative and he is so proud.

Amy is next. She has cooked duck three ways but she forgot her third element, the duck crackling. Gary likes the duck neck sausage. Matt says the flavour is great.

Jamie is up next. He has cooked quail three ways. He is concerned about his ginger sauce. Gary agrees that the sauce has no quail flavour and is quite gingery.

Reynold is next. He has used chocolate three ways. He has created a chocolate log. The judges absolutely love it. George says it is unbelievable. Matt says he could be in the running for the power apron.

The top four dishes belong to Reynold, Billie, Sara and Jessie. The dish of the day and the winner of the power apron is Reynold. The top four will also compete for the immunity pin.

The worst three dishes belong to Matthew, Stephen and Jamie. They are in tomorrow’s pressure test.

Reynold has a special power in tomorrow’s pressure test.